Return of the fallen soldiers

Return of the fallen soldiers 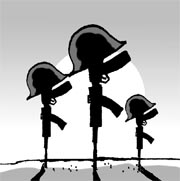 Cho Chang-ho, the first South Korean prisoner of war in the North to defect back to the South, who passed away in 2006, was known as the “fallen soldier who returned.” He was a freshman at Yonsei University when the Korean War broke out on June 25, 1950. He joined the army as a second lieutenant. In September the following year, he was captured by the Chinese. Although the armistice was signed in 1953, his name was not found on the list of prisoners repatriated to the South. In 1977, the Ministry of National Defense listed him as a fallen soldier and had him enshrined at the National Cemetery.

In October 1994, 43 years after he had disappeared, he returned home. At the age of 64, Cho risked his life to defect from the North by crossing the Yalu River in a dugout canoe. Although he was forced into hard labor for decades, his desire for freedom and longing for his home could not be dampened. Scenes of him saluting the defense minister touched hearts nationwide as Cho said, “Second Lieutenant Cho Chang-ho of the artillery unit, military service number 212966, reports his safe return.”

The complex emotions a POW goes through are described in “Gwangjang,” a novel written by Choi In-hoon in 1960. When South Korean POW Lee Myung-jun was asked, “To which side will you return?” he replied, “A neutral country.” His questioner retorts: “There is freedom in the Republic of Korea. Human beings deserve.?.?.,” to which Lee repeats, “A neutral country.” Lee’s suicide, committed on a ship heading to a neutral country, symbolizes the pain that war-weary POWs feel.

A few days ago, four South Korean POWs met their families at a reunion. They, too, were listed as deceased on the military register. When the armistice was signed, the North repatriated 8,343 South Korean POWs, only one-tenth of what is estimated to a total of 88,000. The North maintains that there are no South Korean POWs in North Korea. But about 500 South Korean POWs are reportedly still there. And even that number may be the tip of the iceberg.

The U.S. Army’s motto is to never leave a fellow solider in the battlefield. So should we forever ignore South Korean war prisoners with folded arms?