Korea has its own dinosaur: Koreanosaurus

Korea has its own dinosaur: Koreanosaurus 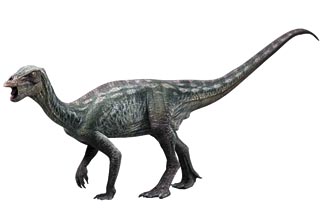 News flash! Korea, it has been so deemed, now has its own dinosaur.

The Korea Dinosaur Research Center succeeded in recovering the figure of the dinosaur, which lived only in Korea, and unveiled the creature to the public yesterday.

The dinosaur, named Koreanosaurus Boseongensis, lived on the southern coast of Korea during the Late Cretaceous Period, which ran from 99.6 million to 65.5 million years ago.

The dinosaur is classified as a hypsilophodont, a small ornithopod. It was about 1 meter (3.28 feet) tall and about 2.5 meters long, weighing in at about 100 kilograms (220 pounds).

Despite the sharp shape of its head and piercing eyes, the dinosaur seemed to be of the mild-mannered herbivorous kind. The center said it seems to have dug into the earth to hide itself from predators.

Since a research team at the center found the fossil remains in May 2003 in Boseong, South Jeolla, the team had struggled with determining the dinosaur’s exact shape. With few dinosaur experts in Korea and with the rock containing the fossil being very hard, it took the team five years to differentiate the dinosaur from other fossils at the site.

“Drawing the figure of the dinosaur took about a year more,” a member of the team said. “We managed to finish the drawing this January with the help of sculptor and computer graphic experts, and other members of the team.”

“The fossil remains that were found in Boseong are estimated to be from the Late Cretaceous Period, which makes the Koreanosaurus a little different from other hypsilophodonts, in that it runs only with its two feet, not all of them, and digs in the earth,” said Kim Jung-kyun, a member of the study center.

Since the team began studying the dinosaur, it has focused on proving that the dinosaur is the first one to have lived only in Korea and naming it after a Korean region.

The multi-year study of the dinosaur finally paid off. It was officially approved last month, when a prestigious 200-year-old German geology journal, “Neues Jahrbuch fur Geologie und Palaontologie,” published the team’s thesis under the title “A New Basal Ornithopod Dinosaur from the Upper Cretaceous of South Korea.” In the paper, the team introduced the dinosaur as “Koreanosaurus Boseongensis”.

The journal is known for having approved 600 to 700 dinosaur names.