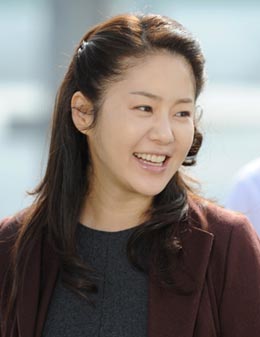 Like the character she plays in “Daemul,” actress Go Hyun-jung has had a life filled with drama. By Kang Hye-ran

Actresses typically fall into one of two main categories: the ingenue whose looks help her win plumb roles and the studied veteran who outshines her peers in every scene.

Although Go Hyun-jung has the looks of an ingenue, Go’s talent puts her among some of the best actresses of her generation. She wasn’t the leading character when she played Lady Misil in the hit period drama “Queen Seondeok,” but her interpretation of the power-hungry main rival to the queen was impressive enough to make viewers remember the show as Misil’s story, not the queen’s. She later won the highest award for an actress at the 2009 MBC Drama Awards for her work.

Ten months later and Go has returned to television as the nation’s first woman president in “Daemul,” which means “big shot” in Korean. In the drama, Go plays Seo Hye-rim, who gets into politics after the government fails to rescue her husband, who is being held hostage in Afghanistan.

With its gripping plot and star-studded cast, which also includes pan-Asian actor Kwon Sang-woo, the drama’s third episode earned an audience share of 26.4 percent, a high figure for such a new program.

The show’s ratings have been helped by its controversial plot, which includes events from Korea’s recent past such as a presidential impeachment and the sinking of a Navy warship.

Like the character she plays, Go has had a life filled with drama.

She got her start as runner-up in the Miss Korea pageant in 1989, which launched her acting career. Her big break came in the 1995 SBS drama “Sandglass.” The drama dealt with modern Korean history from 1970 to the 1990s and was one of the highest rated dramas in history, with average ratings of 50.8 percent. People would rush home just to see a new episode, saying “it’s time to go home,” which meant they had to go home to watch Sandglass.

Go gained notoriety for her marriage to Chung Yong-jin, vice chairman of Shinsegae Group, and the messy divorce that followed in November 2003, in which she temporarily lost custody of her children.

In Korea, divorce is still a big blow to actresses but Go has overcome the stigma and proven that she still has the power to rule the screen.

Here are excerpts from an interview with Go, conducted on location during the shooting of Daemul in Gapyeong, Gyeonggi, last month. 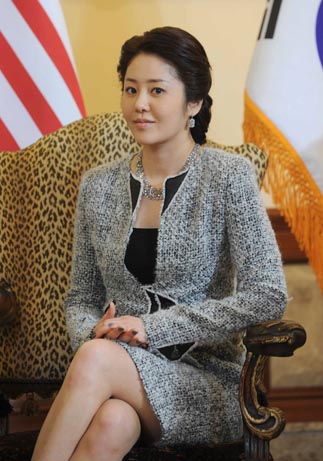 
Q. Which character do you feel is closer to your personality - Misil or Seo Hye-rim?

A. I think I’m closer to Seo Hye-rim but I admire Misil’s charisma. Hye-rim is someone who believes in herself, though she is not as ambitious or strategic as Misil. Misil is more of a dictator, whereas Hye-rim has a skeptical personality. I want Seo Hye-rim to be the type of president that the audience can feel comfortable with.

Seo Hye-rim seems a little idiotic or out of sorts at times. Was that intentional?

I don’t think Hye-rim is an idiot, but she is so earnest that some of her actions come across as silly. And even a serious drama like this one needs some moments of comic relief.

But in general, I think the real idiots are the people who talk a lot but take no action.

What do you think is the secret to your strong image compared to other actresses?

I guess it comes out when I have that sudden anger.

Now that I think about it, I’ve admired the elder actors and actresses who are able to make the whole crowd freeze when they step into a scene. That is only possible for people who have self confidence. But I don’t think having a strong image as an actress is always a good thing.

There has been opposition to Daemul from the political arena. How do you respond to that?

I don’t understand why. This is just a fictional drama. Honestly, I’m worried that the drama might bring up painful memories for those who actually experienced some of the events we portray. In that way it’s also cathartic.

There are lots of magnificent politicians in the country and the whole nation knows that. This drama is just a fictionalized version of the weaknesses of politics.

Your character is similar to certain existing female politicians.

If you can compare my character with a real politician then that means I haven’t done my job. I should do better. I don’t want to make people wish that there is such a character in real life.

Have you ever thought of being a politician?

Never! I don’t like to stand in front of people. Being in politics is totally different from acting. The position requires responsibility, sacrifice and a certain amount of artifice.

How would you like to be remembered as an actress?

I want to be known as an actress who is fierce.