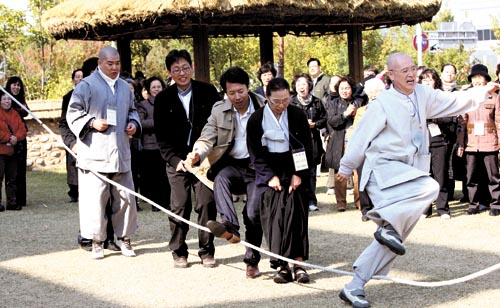 Buddhist monks, Catholic priests, Reverends and Won Buddhism leaders (from left) jump rope together on Oct. 28 at Ansan Culture Center in Gyeonggi. It was the second festival hosted by Ansan to promote harmony among religions. [YONHAP]


More than 4,000 Protestants jammed into a Daegu convention center last week to pray that the government repeal funding for popular Buddhist temple stay programs. Just days earlier, an online video spread like wildfire showing Christians praying at Donghwa Temple in Daegu, then blaming the temple for the city’s high divorce rate and even the 2003 subway fire that killed 192 people. And three days prior to that, another video showed a group of Christians worshipping Jesus at Bongeun Temple in southern Seoul.

The events that have enraged Buddhists across the country are indicative of escalating religious tensions over the last decade.

When temple stays were first offered in 2002 by the Ministry of Culture and Tourism, they gained popularity among Koreans and foreigners eager to flee city life. The Culture Ministry also promoted them as a traditional activity and has earmarked 18.5 billion won ($16.8 million) this year for 100 temples to operate temple stay programs.

But some of the country’s Christians are saying enough is enough.

“Since this nation has no state religion, it is inappropriate for the central government to provide funding for temple stays,” Lee Heung-sik, head of the Christian Council of Daegu, boomed over Daegu Exhibition and Convention Center loud speakers on Oct. 24.

At the mass prayer gathering, he urged Korea’s temples to return facilities built with government money. 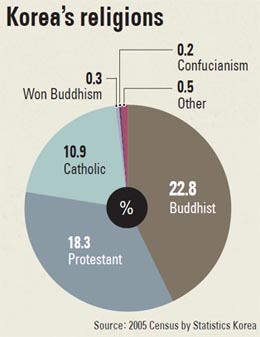 They also hired a law firm to bring the case to the Constitutional Court.

“The government can’t persecute or support a certain religion. It is guaranteed by the Constitution,” said Shim Man-seop, secretary general of the Korean Association of Church Communication. The Culture Ministry says it is puzzled over criticism it has received about the temple stay programs.

“I’ve received a string of phone calls for the past days telling us to stop funding temple stay programs,” said Jung Si-hwa, an official in the Religion Affairs bureau. His main duty is helping the country’s temples preserve their cultural heritage. His other 15 peers at the bureau also support other major religions such as Christianity.

“We support temple stays because we see it as part of traditional Korean culture. Korean Buddhism has the longest history of 1,700 years, while Christianity established its roots here just 300 years ago. Over such a long period of time, Buddhism, of course, affected the everyday lives of ordinary people.

“I think it’s not right to say the government uses taxpayers’ money to promote a certain religion,” Jung added.

According to Jung, the Culture Ministry provides financial support for monasteries and Confucian temples, while other benefits are given to different religions.

“From 2007, we have provided funding for cultural activities and gatherings, such as concerts, which are organized at [Christian] churches,” said Lee Sun-ah from the Religion Affairs bureau. Critics also reject the argument that the primary goal of the temple stay program is to draw foreign tourists because foreigners make up a small proportion of the participants. Of the 140,893 temple stay participants last year, just 19,399 were non-Koreans. That works out to nearly 1 million won per foreigner, taking into account this year’s budget.

“Do you think it is okay to spend that much money to attract a small number of foreign tourists? Will the government fund us on the same level when we develop pilgrimage programs?” argued Shim from the Korean Association of Church Communication.

Christians who worshipped at Bongeun Temple, located in southern Seoul, apologize to Buddhist monks for their behavior on Oct. 27. Traditionally, Korea is a country with a few religious conflicts, but tension has escalated over the years. [JoongAng Ilbo]

Amid heated discussion among the Christian groups, the Culture Ministry and Buddhists, not every Christian community thinks the temple stay program is such a bad idea.

“We see [temple stays] positively, because they are getting rave reviews as a cultural product,” said a spokesman of the National Council of Churches in Korea, which represents the majority of Protestant churches here. “Since Korean Protestant churches are operated based on different congregations and by different reverends, it is hard for us to organize a united program across churches like what happens in Buddhist temples.

“Of course, they need to be transparent when using state funds, but there is no need to [view the funding] negatively,” the spokesman added.

Another Christian group, the Christian Council of Korea, agrees. “Daegu has its own way, but we don’t think this is an issue to make public. We discuss this issue internally,” said a secretary general of the council. Korea’s Catholics don’t seem to have an issue with the Buddhist program, either.

“Some churches don’t want the government to spend money on temple stay programs, but we also receive funding in a different way that the Buddhists don’t receive,” said Lee Young-sik, who leads the media team at Catholic Bishops’ Conference of Korea.

Experts say the issue of state-funded religious institutions is a tricky one.

“Both parties make good points. But it is a divisive issue because there is a fine line between culture and religion,” said Kim Yoon-sung, professor of theology at Hanshin University.

“Fundamentally, their claim [state-support for Buddhism] is right, but you have to consider how religion takes root and affects culture and lifestyle,” Kim added. According to Kim, Korea’s Christians and Buddhists enjoy funding to the tune of 46.8 billion won.

“Minor religions, rather, [should] sue the major ones. I feel like religious conflicts have surfaced, especially in the [Lee Myung-bak] administration,” Kim continued.

The 2005 census found that 52 percent of Koreans said they associate themselves with a certain religion. Of them, 22.8 percent were Buddhists, 18.3 percent were Protestants and 10.9 percent were Catholics.

Lee Charm, president of the Korea Tourism Organization, told the Korea JoongAng Daily in a recent interview that Korea is “a mixture of very different religious backgrounds - strong Buddhist and Christian communities alongside Confucian morals and Shamanistic traditions.” Originally hailing from Germany, he confessed that religious diversity was a factor when he chose to make Korea his permanent home three decades ago. Since October 2008, the Culture Ministry has run a center where citizens can report government officials that discriminate based on religion.

Despite these efforts, religious feuds seem to have worsened over the past decade in Korea.

The cross and the lotus

In March, the Jogye Order of Korean Buddhism, the largest order among Korean Buddhism, sent a letter to the Korea Football Association, asking the football committee to ban Christians from placing their palms together in prayer on the field. Christian football players such as Park Chu-young continued praying after scoring, saying that it is simply a personal religious expression.

In 2008, the National Geographic Information Institute, the state-run mapping agency, stopped including representative temples such as Bongeun Temple and Jogye Temple for the first time when it updated maps.

In July 2007, 23 Korean missionaries were abducted in Afghanistan after they went to the war-torn Islamic country to proselytize. The mission trip was organized by Sammul Presbyterian Church, located in Bundang, Gyeonggi. Two of the 23 kidnapped missionaries were killed by the Taliban when they were taken hostage.

Despite the deaths, it did not take long for public opinion to turn against the missionaries. The group had been taped brazenly chanting Christian songs in the middle of Afghan streets. Further fueling the nation’s rage, the Lee government reportedly paid the Taliban abductors 60 billion won to have the abducted Koreans released. The group filed a lawsuit in July for not stopping them from going to Afghanistan. One of the most remarkable clashes between Korea’s Buddhists and Christians occurred on May 31, 2004. President Lee Myung-bak, then mayor of Seoul, “dedicated Seoul city to Jesus” when he led a prayer in front of hundreds of thousands of young Christians. In the resulting firestorm, 108 Buddhists filed lawsuits against Lee (which ultimately went nowhere).

Back in 2002, the Seoul Metropolitan Government removed a star that had topped its City Hall Christmas tree since the 1960s, replacing it with a Christian cross. At the time, critics complained that it marginalized non-Christians. Lee Mying-bak was inaugurated mayor of Seoul that year.

“Our wired country helped many religions promote their beliefs through mobile phones and other IT tools - but it does have an ugly side,” said Gang Jin-gu, professor of computer media mission department at Kosin University.

IT gadgets, he said, are used as a way to promote a negative image of others’ religion, and the views spread quickly and reach more people than in the past. “In the old days, even if people didn’t like another religion, they kept it to themselves. Not anymore, though.” About 200 religious leaders and related officials from seven religions are gathering today in Daejeon for a conference to discuss ways to deal with conflict.

“If you don’t understand your neighbor’s religion, it causes tremendous chaos, so we came to a conclusion that we have to seek solutions,” said Choi Gun-duk, chairman of the Korean Conference on Religion and Peace in a statement. “This nation has been dealing it [religious clashes] well over the past decades, after all.”