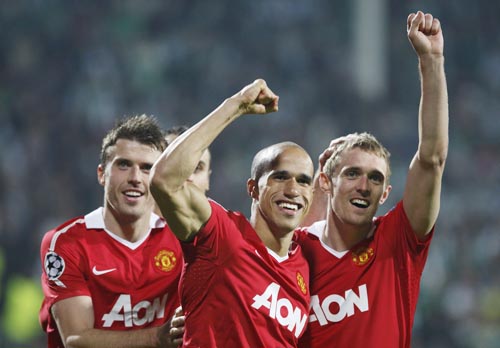 
BURSA, Turkey - Manchester United virtually assured themselves of a place in the Champions League knockout rounds here Tuesday with a comfortable 3-0 victory over Turkish side Bursaspor.

Fletcher put United on course for the win after rifling a low finish past Dimitar Ivankov in the 48th minute at the Bursa Ataturk Stadium. Obertan then doubled the lead with a superb second on 73 minutes, latching onto a pass from Park Ji-sung before thundering an unstoppable shot into the roof of the net.

Four minutes later, new Portuguese signing Bebe bagged his second goal for the club in the space of a week, poking the ball past Ivankov after an exquisite reverse pass by the evergreen Paul Scholes. While the victory puts United on the brink of qualification, needing only a point from Rangers in their next match to go through, the defeat condemned Bursaspor to a first round exit.

The Turks, playing in the tournament for the first time, are on course to be the worst performing team in Champions League history, still goalless and pointless after four matches. United manager Sir Alex Ferguson said Fletcher’s goal early in the second half had proved decisive.

“From that point on we were basically in control of the match,” Ferguson told Sky Sports. “They had a couple of half chances and you can never be sure. But the second goal killed the match.”

Fletcher meanwhile said United would now seek to wrap up qualification as quickly as possible.

“We’re in a great position now with two games to go - the quicker you qualify the better, so we’ll try to do that,” Fletcher said. “We felt that if we could get the first one we could control the game from there and it would open up for us and it went to plan.

A low-key first half saw Bursaspor dominate possession although United’s defense remained in control for the most part. The Turkish champions wasted a glorious chance to take the lead on 22 minutes, when a poor back pass by Patrice Evra let in Sercan Yildirim, who released Volkan Sen, only for the midfielder to see his shot saved.

United, forced to shuffle personnel when Nani limped off with a groin injury midway through the half, had the ball in the net after 39 minutes when Scholes burst into the box following some neat interplay with Park. But the veteran midfielder’s goal was negated after German referee Wolfgang Stark spotted that Scholes had controlled the ball with his arm.

While the match was level at halftime United always looked capable of raising their game, and they did so to lethal effect early in the second half.

A sweeping pass move saw Michael Carrick pick out Fletcher, who controlled with one touch and blasted into the bottom corner. Bursaspor wilted visibly thereafter and goals from Obertan and Bebe were no less than United’s dominance deserved.

Meanwhile, Park Chu-young of AS Monaco scored his second goal of the season in a 2-2 draw with Bordeaux.

The point was not enough to lift the 2004 Champions League finalists out of the bottom three and leaves them with just one win in their last 11 league matches with their two goals ending a drought stretching back six games.