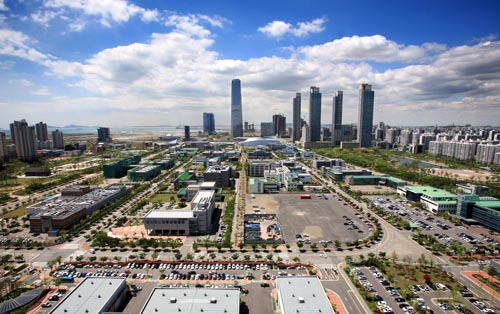 Lee Jong-cheol took the reins of the Incheon Free Economic Zone on July 26, stepping into the post with lofty goals. He reached his 100th day in office on Nov. 2 saying he has already made significant progress but that there is still a lot of work that needs to be done.

During this period, Lee worked hard to increase incentives offered to businesses that operate in the IFEZ. He focused specifically on reducing taxes, eliminating certain visa requirements in the Yeongjong District, establishing a foreign hospital and attracting international educational institutions. He has looked to change the real estate investment system covering immigrants and recently visited officials from various government bodies. His main goal has been to clear the obstacles that stand in the way of the free economic zone’s development.

Lee said he received a positive response from the Ministry of Justice on the real estate situation and that he will continue to aggressively lobby for increased incentives and lower taxes.

He has also beefed up efforts to attract foreign investments, which is key to helping the IFEZ realize its full potential. The IFEZ has been able to ink six new contracts and three memorandums of understanding with Lee at the helm, highlighting the zone’s potential. The new deals total 582.1 billion won in investments, including 455 billion won from local companies and the rest from firms in the United States and others.

“Recently, investments in businesses centered around biotechnology, the medical industry, IT and digital entertainment have been increasing,” Lee said. “There are four projects that we are expecting to win soon, including ones involving Johnson & Johnson and UTC from the United States. We expect to land about $20 million in additional investments from foreigners, which will help speed up the development of the IFEZ.”

The agreements cemented in recent months include a deal with Crucell of the Netherlands for additional investments in Berna Biotech Korea; a pact with a Japanese firm tied to the Songdo Digital Entertainment Center; and an agreement with CJ Cheiljedang for construction of a bio research center. Other deals involve Cisco, Utah University, Boeing and Kaco of Germany for a variety of high-profile projects and ventures in the IFEZ.

Since the IFEZ opened in October 2003, organizers have been able to lure $1.05 billion in foreign direct investment (FDI). As of the end of September FDI has tripled this year alone, reaching $468 million compared with $155 million in 2009.

The IFEZ is working hard to form a competitive industrial cluster by attracting foreign and local companies that can serve as anchors to the development - helping lure even more investments. Lee and other officials are actively promoting the zone’s regional competitiveness to investors and are actively engaged in responding to concerns expressed by companies already operating within the zone.

“We expect investments to increase with the arrival of new heavyweight companies on the global stage,” Lee said.

Aside from speeding up the development of the IFEZ and clearing some hurdles, Lee has set up a new panel to help address complaints from Songdo residents tied to construction of a gas facility.

As part of this effort, IFEZ officials held 12 meetings and reviewed 17 items. They then set up a regular weekly meeting with businesses operating within the zone going forward. Through multiple meetings, the IFEZ was able to help pave the way for the resumption of construction of the Northeast Asia Trade Tower (NEATT), a landmark facility representing the IFEZ.

This will further help attract foreign investments and has helped normalized operations and relations within the Songdo International Business Complex, which is a key part of the IFEZ.

With his first 100 days behind him, Lee will now focus on the second phase of construction on the Songdo Convensia to reinforce the competitiveness of the IFEZ and help prepare for the 2014 Asian Games. Currently, the basic budget has been applied to the second phase of the Songdo Convensia. Construction is set to kick off in July 2011 and is scheduled to wrap up in May 2014.

Officials plan to adjust the strategy for Songdo Landmark City in particular so that it fits in with the overall IFEZ development plan, with profits to be reinvested in other areas of the zone.

Representatives of the IFEZ are also working to resolve issues surrounding the construction of the Yeongyu Muui Tourism Complex City as well as Milano Design City.

At the same time, to promote Korea’s traditions and culture, the main park in Songdo International City will be transformed into a major tourism spot in Incheon. The site will include the tentatively named Incheon Traditional Hanok Village, which will host everything from traditional performances and shows to concerts and festivals featuring Korean cuisine.

“After I came into office, I met many people and worked hard to set the development path for the IFEZ,” Lee said. “It was a very busy 100 days. I will continue to work hard to make IFEZ into an international multi-purpose business city with plenty of things to see and do.”