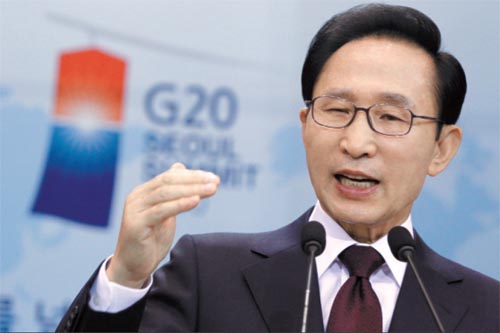 President Lee Myung-bak answers a reporter’s question at a news conference on the G-20 Summit at the Blue House in Seoul yesterday. [AP/YONHAP]


President Lee Myung-bak told a group of foreign and domestic reporters of his hopes for the Group of 20 Summit next week, and said he didn’t expect North Korea or Al Qaeda to stage a terrorist attack to disrupt the meetings.

Lee addressed 160 journalists from Korea and abroad at the Blue House yesterday in a 50-minute press conference to talk about hosting the leaders of the world’s 20 major economies and major international organizations on Nov. 11 and 12 in Seoul.

He promised that Korea would put forth a 100-point “action plan” to narrow the development gap between rich and poor nations.

In an opening speech, Lee hailed the progress made at last month’s G-20 finance ministers meeting in Gyeongju, saying it laid down a foundation for international cooperation to resolve trade, currency and other economic imbalances.

“At the Seoul summit, we will try to achieve tangible achievements on agenda items initiated by Korea, based on our experience, of building a global financial safety net and narrowing the development gap [between rich and poor countries],” Lee said.

The president also highlighted the business leaders’ summit that is set to take place on the eve of the G-20, saying he hoped similar summits will be held at future G-20 meetings.

Lee then answered 11 questions from the media on a range of issues including North Korea and domestic politics.

The president said he doesn’t expect North Korea or Al Qaeda to attack the country during next week’s G-20 Summit, but Lee said Korea had readied itself for any possible emergencies.

North Korea has a history of staging terrorist attacks or armed provocations when the South has hosted international events in the past, such as the 1988 Olympics and the 2002 World Cup games.

An oil pipeline operated by the Korea National Oil Corporation was blown up in Yemen Tuesday, but Lee said it had yet to be confirmed whether Al Qaeda was behind the attack.

Addressing the ongoing global currency dispute, Lee said it was fortunate that the Gyeongju meeting resulted in an agreement calling for truce on competitive currency devaluations.

“Instead of resolving the currency issue alone, a proposal was made to evaluate the situation more comprehensively by [looking at countries’] current accounts,” Lee said. “And that allowed the G-20 countries to cooperate. I believe efforts will be made at the Seoul summit to set the specifics of [current account] guidelines.”

“I believe the leaders of the United States, Europe and China will have discussions freely at the Seoul summit to make progress based on the principles agreed in Gyeongju,” Lee said. “I appreciate the Chinese government’s efforts and also expect the cooperation of President Hu Jintao.”

Korea intends to promote a development agenda, Lee added, to support sustainable growth in poor nations. By doing so, Lee said the G-20 will gain legitimacy as a global economic forum when it acknowledges the importance and interests of the 170 nonmember countries.

“At the Seoul summit, we will set forth a 100-point action plan and evaluate the progress every year to achieve a fruitful outcome,” Lee said.

Lee said North Korea could become a beneficiary of the program, and he urged the communist regime to engage the international community to receive support.

“North Korea should follow the model of China and open up its country to the international community,” Lee said. “If the North meets such conditions, we are ready to provide not only the development program to be agreed at the G-20 Summit, but also bilateral assistance. It’s completely up to North Korea.”