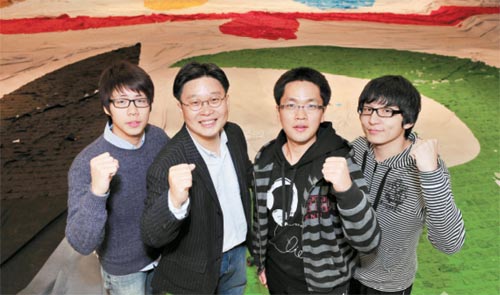 A banner will be hung near Gwanghwamun Plaza in Seoul before next week’s G-20 Summit. Seo Kyoung-duk, second from left, was in charge of the project. [NEWSIS]


To mark Seoul’s hosting of next week’s G-20 Summit, a large banner will be displayed near Gwanghwamun Plaza in downtown Seoul, containing the dreams of 20,100 people from around the world.

While working on the project, the creator came across an unusual dream - that of human rights activists in Japan who are seeking justice for former Korean sex slaves who were mistreated during their country’s colonial rule of Korea.

Seo Kyoung-duk - a visiting professor at Sungshin Women’s University in Seoul and director of the project called “100 Years Dream of World” - said his goal was to “promote Seoul and Korea to the world as part of the G-20, and to give hope to people.”

Seo traveled the world, visiting 90 countries, as well as the UN in New York City, asking people to write down their dreams.

The banner measures 30 meters (98.4 feet) by 50 meters and contains 20,100 small patches of cloth - in recognition of the year 2010 - and is done in the shape of the Korean word “ggum,” which means dream. The squares are in four traditional colors - yellow, blue, white and red.

The Creative Culture Club, an association of university students in Korea, helped on the project, which was sponsored by the government.

During his travels, Seo ran across the Japanese activists fighting for the former sex slaves. These women were forced into sexual bondage and brutally abused by members of the Imperial Japanese Army during that country’s occupation of Korea from 1910 to 1945.

Since 1992, at least five Japanese prime ministers have apologized to the surviving women, known by the euphemism “comfort women,” but critics say these statements are often voiced in carefully couched terms designed to protect the government from liability, and the officials almost never discuss the issue of compensation. The Korean government and the UN have repeatedly demanded an official apology.

Time, however, is running out for the comfort women, who are dying of old age.

The activists said the Japanese government should take responsibility for the abuse of these sex slaves and make a true, official apology.

Yaseuhiro Isikawa, an economics professor at Kobe Women’s University in Japan, has been working on behalf of the former sex slaves since visiting the House of Sharing - created as a refuge and place of activism for these women in Gwangju, Gyeonggi - in 2004.

Isikawa said he was shaken by the experience. “When I entered the house, I thought ‘how I could help solve this matter as a scholar,’ ” said the professor.

Isikawa and his students even participated in “Wednesday Demonstrations,” weekly demonstrations held by comfort women in front of the Japanese Embassy in Seoul since 1992, where they repeatedly demand an apology.

“We feel sorry for these women,” Isikawa said. “We insist the Japanese government make an apology to the women. No one can escape the truth.”

Jiemi Seiko, one of his students, said, “Because no [Japanese] textbooks deal with the women’s story, we have visited schools in Japan to tell the truth.”

Seo found that many Japanese are now describing the women as “halmuny,” not slaves, a Korean word meaning grandmother, with a warm connotation.

“I think people use the word “halmuny” in respect for the courage of the women to reveal their stories to the world.”

Seo asked the Japanese activists how their dreams should be written on the cloth.

“In striving for a peaceful Asia and world, we would like to see a smile on the halmuny’s face, after the Japanese government makes an apology and compensates them for their pain,” the activists said.