Smoke billows from an oil pipeline blown up in the southern Yemeni province of Shabwa on Tuesday. The pipeline was operated by a Korean firm, officials said, but whether terrorists were responsible was unknown. [REUTERS/YONHAP]


An explosion possibly linked to Al Qaeda hit a Korean oil pipeline in Yemen on Tuesday, raising security concerns for the G-20 Summit in Seoul next week.

The Ministry of Foreign Affairs and Trade said yesterday that a 204-kilometer (128-mile) pipeline at an oil field in the eastern Yemeni province of Shabwa, managed by Korea National Oil Corporation, was hit by a blast at 8 a.m. Yemeni time (2 p.m. Korean time).

Video footage of the explosion aired by YTN showed a section of pipeline engulfed in flames with billows of black smoke blanketing the horizon. 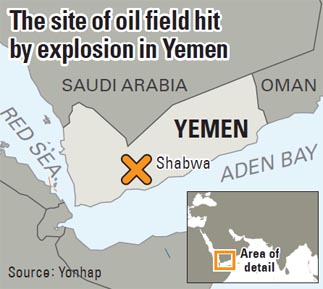 The ministry, citing local authorities, said a deliberate attack is suspected because remains of explosives were found near the site. Yemeni authorities are examining the remains, the ministry said.

No one was hurt in the explosion, but it caused an oil leak, the ministry said.

The Ministry of Knowledge Economy, which is responsible for commerce and energy, said the leak was not large, but the Foreign Ministry said it could be a significant amount.

“Some locals estimate the oil leakage is up to 10,000 barrels,” said a Foreign Ministry official. The field produces around 100 barrels of oil a day, according to KNOC.

According to Agence France-Presse, Al Qaeda claimed responsibility for the bombing. If confirmed, it will be the third attack in 19 months in Yemen apparently targeting Koreans or Korean companies.

In March 2009, four Korean tourists were killed in a suicide bomb attack in Yemen. Three months later, a group of nine foreign medical volunteers, including one Korean, was kidnapped by terrorists and all were killed.

The Foreign Ministry said it is too early to blame Al Qaeda. In Yemen, attacks against public or private facilities by insurgents, tribesmen or gangs to protest government policies or to extort money are common. KNOC said it suspects a tribal conflict.

KNOC has been developing four oil fields in Yemen since 2007.