A hard look at corruption with some unusual suspects

A hard look at corruption with some unusual suspects 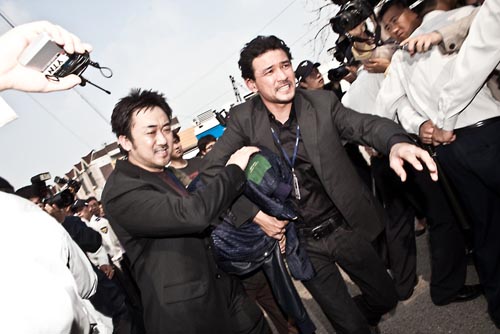 Choi Cheol-gi (Hwang Jeong-min), right, brings in an actor for questioning in a scene from “The Unjust.” Provided by CJ Entertainment


In his latest film, “The Unjust,” Korea’s favorite action kid Ryu Seung-wan shows hidden depth as a competent director with an intricate story about corruption and moral decadence that avoids the pitfalls of political thriller cliches.

When news of a child getting murdered shocks and angers the nation, the pressure of a direct presidential order leads to a scheme organized by a dirty sponsor, Jang Suk-gu (Yoo Hae-jin), and an executive police officer, Choi Cheol-gi (Hwang Jeong-min). The two hire an actor to play the role of the criminal. At this point, public prosecutor Ju Yang (Ryu Seung-beom) gets involved and when Choi arrests Ju’s sponsor, a real estate mogul, Ju seeks revenge. But he accidentally finds out the scheme between the police officer and the dirty sponsor and uses this knowledge to his advantage.

The Unjust presents a web of characters typical of the political thriller genre, which usually has the bad guys conflicting with the good. The unsettling thing about The Unjust, however, is that all four characters are ultimately “bad” and it is hard for the audience to like any of them. None of them have an “aha!” moment that saves them from their corrupt ways. But while lesser films would try to squeeze some tears out of the audience, The Unjust remains unapologetic about the characters’ deception and unfortunate fate.

What saves their collective menace from appearing flat are their moments of weakness. Each encounter their “Hamlet with the bloody sword” moments in their own way, but none of them can swim out of the mess they are in.

The film’s conflicting themes - money versus status, justice versus personal gain, or the public against the state - show that struggle is relative and that no matter which side you are on, you are faced with decisions that have no guarantees.

Whether it is the criminal actor at the bottom of the food chain, the power-hungry police officer who strives for higher status, or the prosecutor who feels insecure about having gotten his job through personal connections, the characters all act based on fear, fueled by their own insecurity or greed.

In a mature step forward as a storyteller, director Ryu tempers his rebellious style to bring out a certain rawness in the sensitive, yet complicated plot.