A road movie with a romance at heart

A road movie with a romance at heart 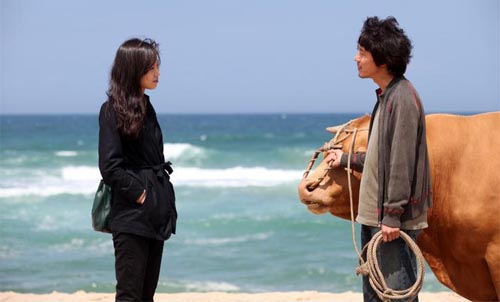 ‘Rolling Home with a Bull’ follows an unlikely trio: a poet (Kim Young-pil, right), his ex-girlfriend (Gong Hyo-jin) and a bull. This road movie, based on the idea of a Buddhist pilgrimage, offers sumptuous images of the nation’s rural areas. Provided by Lotte Entertainment


It’s been a bloody year at the box office with a flood of violent films hitting the silver screen. Filmmakers seem to be almost competing against each other to see who can shock the audience the most with plots in which villains use every murder tool imaginable, from a guillotine to a nail gun.

Considering this latest trend, “Rolling Home with a Bull” directed by Lim Soon-rye is definitely a departure. It contains no violence or foul language. Rather, it depicts the journey of a bull, a poet and his ex-girlfriend. At its core, it is a romance, and it walks a fine line between being a road movie and one about religion.

Sun-ho (Kim Young-pil) is a poor poet and farmer who has received little recognition for his artistic work. Sick and tired of shoveling bull feces, he hits the road to sell the bull, which belongs to his father. While he is on his way to the cattle market, Sun-ho receives his first phone call from his ex-girlfriend Hyun-su (Kong Hyo-jin) in seven years. She has some sobering news to deliver: her husband, Min-kyu, who was once friends with Sun-ho, has died.

As director Lim told reporters at a press screening for the film late last month, the journey of the three companions was inspired by the concept of a Buddhist pilgrimage to find one’s self. The film is based on the Korean novel of the same title.

“Although the novel is based on a Buddhist pilgrimage, I thought it could be developed into an unconventional love story,” said Lim, one of a few female directors in Korea.

In telling its story, the film employs many Buddhist symbols, including a bull, lotus and temple bell, throughout the film. As a Buddhist monk explains in one scene: in Buddhism the bull symbolizes enlightenment. The Buddhist motifs are not overwhelming, though. Instead, the film stays true to its genre.

As the unlikely trio travel around rural Korea, the screen fills with images beautiful enough to make viewers get itchy feet.

“I think it’s hard to see the landscape of this country in recent Korean films. I wanted to spotlight the subtle beauty of nature, such as flowers, the sea and [rice] paddy fields,” Lim told reporters. “In this film, the bull and the environment are as important as the story.”

Rolling Home with a Bull is also a love story. But the film does not elaborate on the details about the three friends and their past. Instead, it provides a vague sketch and lets the viewer fill in the rest. What we do know is that the three used to be close friends but they grew apart after Hyun-su and Min-gyu got married. Somehow, their relationship goes sour, but the audience is left to determine the reason.

“I liked the screenplay because it wasn’t that detailed,” Gong said. “It gave me more room to think about my character.”

The willowy 29-year-old actress started her career 12 years ago as a model, but after turning in strong performances in various roles, she quickly gained attention as a serious actress. Kim Young-pil, a long-time stage actor, also stars in the film.

“I also believe their present relationship provides plenty of hints to their past,” Gong said. “If a movie is direct and obvious, viewers leave the theater with a single message, but if it’s not, the film can be interpreted in many ways. I think Korean moviegoers are mature enough to enjoy this type of film.”

Rolling Home with a Bull was screened at the 15th Pusan International Film Festival and opened yesterday at theaters nationwide.