Still no word on the POW who almost got away

Still no word on the POW who almost got away 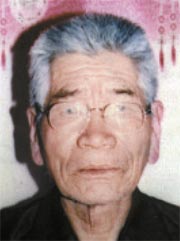 As prisoners of war re-emerge as an issue between North and South Korea, the fate of one South Korean POW is still unknown - although he isn’t forgotten.

Han Man-taek, who was captured by North Korean soldiers during the Korean War, escaped to China on Dec. 26, 2004, and stayed at a hotel waiting to meet a nephew from South Korea. Chinese police stormed the hotel the following day, arrested Han and sent him back to the North in January 2005.

Han’s plight in the North revived the issue of lost POWs in South Korea. Han’s family in the South made public a letter Han sent them from North Korea (which included the photo at right), in which he said he was beaten by North Korean authorities. The family also returned a medal the South Korean government awarded him to protest what they felt was a lack of effort by the government to secure his release.

According to civic groups and sources in the South, Han was believed to have been sent to a prison camp located in South Pyongan Province three months after being hauled back from China. Han, if he is alive, would be 77 this year.

The POW issue has become current again following the recent reunions of families separated during the Korean War. One of the ways Seoul tries to find out the fates of POWs is to request them to be allowed to join reunions. Last month, the South Korean Red Cross handed over a list of 200 possible candidates for the most recent round of reunion, which included 26 men on Seoul’s list of POWs and kidnapped South Koreans. North Korea informed the South that the status of only one, Seo Pil-hwan, could be confirmed, and that he was dead. It refused to comment on the fate of the other 25.

According to sources yesterday, Han was one of the 25 South Korean soldiers whose whereabouts North Korea said were “unavailable.”

Officially, Pyongyang insists that it holds no POWs and that every South Korean living in the North does so voluntarily. The South Korean government believes there are roughly 500 POWs still alive who were forced to stay in North Korea after the war, and about 400 civilians abducted by North Korea during and after the Korean War.

The POW issue has been put on the back burner due to the bigger unresolved issue of separated families. Around 83,000 people in the South, mostly over 70 years old, still haven’t been able to meet their loved ones in the North.

The North was also less cooperative on the POW issue than with the family reunions. North Korea calls South Korean soldiers in the North “Euiyonggun,” meaning “Volunteer Army.”

Between 2000 and 2009, Seoul requested Pyongyang to confirm the whereabouts of 262 men on its POW list, but the North replied that for 193 of them, or 73.7 percent, “confirmation [was] unavailable.” In the case of separated families, the North gives such an answer to only 30 percent of the South’s requests.

“The South wants a fundamental solution to the POW issue, while the North wants to use it as a card to draw more financial or food aid from the South,” said Yang Moo-jin, a North Korean studies professor at Kyungnam University.

The government hopes the POW issue will be discussed at inter-Korean Red Cross talks scheduled later this month. The latest family reunion event at Mount Kumgang, in which around 200 South and North Koreans met their separated families, will end today.