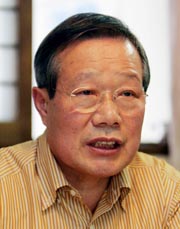 Few people in history have had the kind of life and career changes as Kim Shin-jo.

Trained as a special forces soldier in North Korea in the 1960s, Kim was one of 31 commandos sent on a secret mission to assassinate South Korean President Park Chung Hee in January 1968. In the “Blue House Raid,” Kim was the only one in the squad to be captured alive. (Two commandos managed to get back to the North; the other 28 were killed.)

After a year of interrogation by South Korean authorities, Kim was allowed to settle into civilian life in the South and became a citizen in 1970. He converted to Christianity and has been serving as a pastor since 1997.

Yesterday, the former commando, 68, was appointed by the ruling Grand National Party as a North Korea human rights adviser.

The JoongAng Ilbo conducted a phone interview with Kim yesterday.


Q. Why did you take the job as an adviser?

A. I was working with Hwang Jang-yop [former secretary of the Workers’ Party of North Korea who defected to South Korea in 1997] to help defectors. After he passed away recently, defectors asked me to work on defector-related issues.

It is a pity that Hwang could not witness the passing of the North Korean Human Rights Act [ a bill before the National Assembly to promote North Korean human rights].

How will you perform your job?

When South Koreans try to help those in the North, it is naturally important to help them with material assistance. However, what is much more crucial is to treat them as human beings. I want to appeal to both politicians and the public. If [one] truly longs for reunification and wants to help North Koreans, [their] human rights should be guaranteed first of all. Whether someone’s talking from the Grand National Party or the Democratic Party, the issue at stake goes beyond political borders. There should be one voice and one method regarding the issue. The human rights issues and defectors problems should not be politicized.

The North Korean Human Rights Act has not been passed.

The act should be passed within this year. It is what 20,000 defectors in South Korea wish for from the bottom of their hearts. Their parents, brothers and sisters in the North are suffering. The National Assembly should understand this and pass the bill.

What do you think of Kim Jong-un being named successor to his father?

We cannot help with it since that’s how their system is. I do not mean it is good, but the North’s system works that way. We cannot meddle in that process.

I do not understand South Korea. We have many problems to deal with in South Korea, but we should speak in one voice in dealing with North Korean issues.

What do you want to say to North Korean defectors?

I tell North Korea defectors that those who make the best efforts end up successful in Korea. When I came into society on April 12, 1970, I received nothing from the government. I worked hard and raised my son and daughter well enough. It is a falsehood if you believe that people might help because you came from North Korea.

When you met Park Geun-hye at Hwang’s funeral on Oct. 11, what did you say to her?

I said Kim Il Sung knew that if President Park Chung Hee was alive in the South, South Korea would surpass North in terms of development. That’s why he sent me to kill him, and I found it true when I came here.”