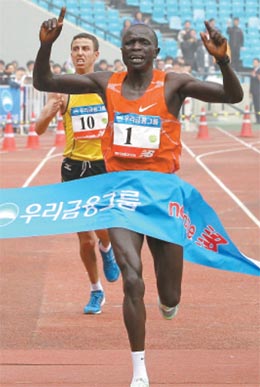 David Kiyeng of Kenya was two seconds shy of tying a course record yesterday in the 2010 JoongAng Seoul Marathon but still crossed the finish line ahead of the pack to take first place.

Having finished fourth in last year’s event, the 27-year-old was considered the top runner in this year’s marathon and looked poised to win early on. He managed to stay with the lead pack throughout the race and then broke away to finish the course in two hours, eight minutes and 15 seconds, holding off the surging Mohamed El Hachimi of Morocco.

“I’m happy to have won the race, but it’s regrettable that I missed the course record by merely two seconds,” Kiyeng said. “I will compete again next year and will set a new record.”

With the win, Kiyeng received $70,000 and an additional $10,000 for finishing the race in the neighborhood of two hours and eight minutes. He fell two seconds short of the record set by Jason Mbote of Kenya in 2006.

“There were many good runners from places like Ethiopia and Morocco,” Kiyeng said. “I wanted to maintain my pace at the head of the pack as much as possible before going for the win at the 40-kilometer (24.9-mile) mark of the race.”

Having competed in long-distance events like the 5,000-meter until his collegiate career at the Korea National Sport University, this was the 23-year-old Hwang’s third marathon.

He had been with the lead group until the 30-kilometer mark before falling back in the final stretch of the race.

“I nearly collided with a volunteer worker between the 30 to 35-kilometer mark,” said Hwang. “I think I was out of sync from that point on.”