Kim Duk-soo: Our boundaries are no longer our barriers

Kim Duk-soo: Our boundaries are no longer our barriers 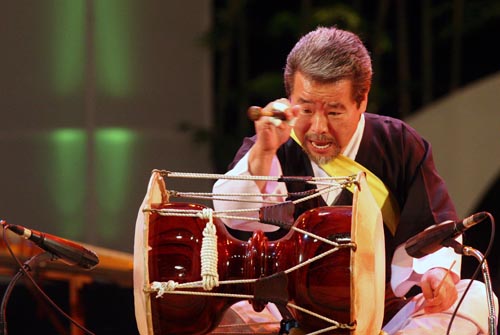 Kim Duk-soo is not only one of the most respected traditional musicians in Korea, he is also known for his support of the disabled.

Kim is a famous janggu drum player who brought the traditional instrument back into the limelight with his former music troupe Namsadang.

He recently performed at a Stevie Wonder concert in August with other percussionists and talked with the Korea JoongAng Daily on Oct. 13 at Korea National University of Arts, where he teaches, and shared his ideas on traditional music and how he came to pay attention to the disabled and their unique talents.


Q. How did you get to perform with Stevie Wonder?

A. Stevie first heard our music about 30 years ago through my friends in New York, and has since shown interest in our music. Before his concert last August in Korea, he asked me to join and I felt honored to perform with him on stage.

I heard that you would not appear on stage for a special introduction by Stevie Wonder. Why did you refuse his invitation?

It wasn’t my concert, but Stevie’s. I wanted to give the audience more time to communicate with him. Right after the concert, he came looking for me in the makeup room backstage and for 15 minutes we sang and danced together. To me, that was the real concert and party.

I heard you do a lot of work finding talent among the disabled. 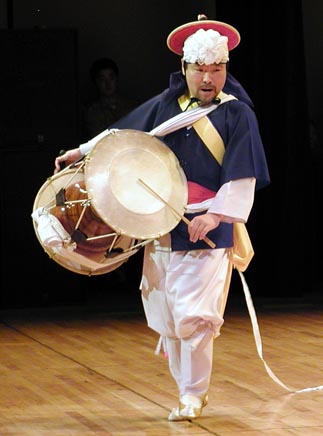 Kim Duk-soo performs in 2007 at a commemoration for the 50th anniversary of his debut. He started when he was just 5 years old. Provided by Kim Duk-soo

I think the disabled, either intellectually or physically disabled, have some advantages when learning to play instruments. The blind, especially, have more sensitive hearing abilities, which could lead them to become fantastic musicians.

I had known one person who (was mute) when I was young. He was known as Cha “beokgu” (a type of percussion instrument), because he was so good at it. I always wondered how he got the rhythm. Later on, I realized that he played based on his heartbeat.

I heard Jeon Jae-deok, a blind harmonica player, was in your samulnori (a genre of traditional percussion music in Korea) group.

I was actually the one who gave Jae-deok his first harmonica. He had an excellent sense of music and got the right notes and rhythm.

I don’t agree with the idea that blind people should just work with their hands. They can use their talents in other ways. I think it’s best for the disabled to teach each other their talents and how to discover them. They will find their own way to overcome barriers to become better musicians. I had a number of intellectually disabled students this year for the first time, and I’m amazed at how fast they learn and develop their own musical skills.

Do you agree that traditional music is often considered outdated?

I would say that tradition is not something that has stagnated, but something that keeps changing as trends change. What you know as samulnori has become its own classic genre of traditional music. It incorporates the basics of traditional Korean music along with many new forms. For example, digilog samulnori (similar to the original samulnori except with new digital media displayed on stage) was performed for the first time this January.

In that sense, you are saying that what we know now as traditional Korean music is an updated, adapted version?

Of course. It has always been changing and adapting. Tradition, in other words, is an aggregate of endless transformation. In our scientifically advanced world, everything seems to change quickly. So whenever I present music to an audience, I’m always nervous and can feel my heart flutter. It’s like the first night of a young couple’s honeymoon.

Have you thought about who is going to take over for you and carry on your legacy?

When it is the right time, heaven will assign someone to become my successor. I think it’s too soon to worry about having a successor. I still need to study what my parents’ generation achieved, digest it according to the current trends and then give insight to younger generations.

Regarding your students overseas, are they locals or Korean nationals who moved abroad?

Some are Korean nationals and some are locals. Just like how Europeans and Americans brought their instruments to the Korean Peninsula about 100 years ago, I think it’s time for us to take our music to countries that are not familiar with our traditions. Those who are overseas are going to set the foundation to spread traditional Korean music. Eventually, (other cultures) will adapt our music to make it part of their culture. This is the essence of the Korean wave.

It’s been said that Koreans do well in promoting their culture. But while more foreigners are interested in Korean traditions, Koreans themselves are less interested.

In my opinion, Koreans have been too busy absorbing what’s new and what’s different. In (the last 120 years) we went through a lot of social upheaval. Until (recently), we were a developing nation. We were starving for too long and suffered other hardships.

Because of all this, everyone seemed to be eager to follow major international trends - especially things flown in from the West - thinking those trends will make them superior to others. As a result, our traditions have been discarded until now. Many don’t know that B-boy dancing is a developed version of ttangjaeju (traditional Korean ground dancing).

What can be done to get people to pay more attention to their cultural roots?

They will come back naturally. There’s no need to try to get people to look at what is already in their blood. We are nearing the end of the trend where people strive to be the best in everything they do. We are no longer a poor country that has to worry about getting food every day.

Even if the nation’s president emphasizes the importance of keeping up traditions, it would be of no use. The public is going to come back when they are good and ready. Look at how the well-being trend swept over the peninsula; vegetables, which were once the main dishes of poor people, are now more popular than ever. Even the rich sometimes decline to eat meat.

Tell me about the Korean musical instruments you use.

Let me tell you this first. Musical instruments, whether in Korea or in other countries, reflect the harmony of nature and human beings.

Korean spirit has accumulated over the years and is absorbed in instruments. But since Confucian society during the Joseon Dynasty looked down on instrument makers, no one wanted to take over for the family business.

In the past, eight people were needed to sound a gong. Guess how many people do it now? Just one. That one person does the job of eight people. How can we expect these instruments to sound right when played?

Why are there no brand names when it comes to traditional Korean instruments?

That is a problem for us. Even though the music itself is getting popular and the demand for the instruments is steady or increasing, there are still no brand-name traditional Korean instruments. Brands should be established so craftsmen take responsibility for what they produce.

But it’s been said that branding could result in traditions becoming too commercialized.

Being commercialized is not a bad thing. It means that there is demand for instruments and they are being played. I think there should be more brands so that customers have choice. Then craftsmen will compete to make better products.

Culture was once divided into two categories: Eastern and Western. But since people carry the globe with them in their palm of their hands with their smartphones, the line between East and West is meaningless.

We need to make sure that we abolish boundaries as we keep the essence of our own beauty. My plan is to create a universal culture that is based on Korean traditions.