For Korean girl groups, it’s all about quality

For Korean girl groups, it’s all about quality 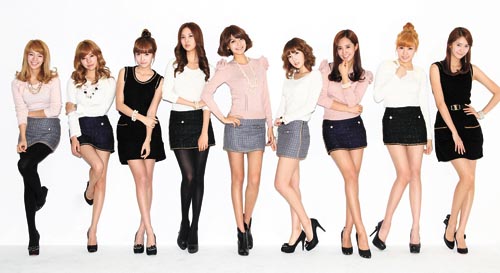 Korean girl group Girls’ Generation is garnering a lot of interest from young Japanese fans these days. The band hit No. 1 on the weekly Japanese Oricon charts on Oct. 2. Provided by SM Entertainment


What is at the heart of the latest Korean wave, say some experts, has less to do with Hallyu itself and more to do with higher quality music and performances.

Korean girl groups are experiencing a sudden surge of popularity in Japan. Leading the pack are Girls’ Generation and Kara, who recently hit the No. 1 and No. 2 spots on the weekly Japanese Oricon charts on Oct. 29. Some Japanese media outlets have even dubbed it the “Korean Invasion,” in reference to the “British Invasion” led by such groups as The Beatles and Rolling Stones during the early 1960s in the United States.

The Japanese had been far ahead the game in terms of girl groups. But as of late, Korean girl groups have hit their stride there. Some largely attribute their popularity to Korean entertainment companies famously rigorous training and preparation regimes.

“The amount of time spent on training and practice is incomparable,” said Hong Seung-sung, head of Cube Entertainment. “The Japanese have a tough time understanding how we put our artists through daily 12-hour singing and dancing training sessions.”

“Those in the Japanese pop industry ask us how we’re lined up and in total sync during our performances,” said Jessica (Jung Su-yeon) of Girls’ Generation. “They seem to be impressed and asked us how much time we spend on training.”

Chart-topping girl groups in Japan are significantly different from those found in Korea.

The 48-member band AKB48 is the most popular girl group in Japan. Provided by Osen


The most popular Japanese girl group at the moment is AKB48, a theater-based group that holds regular performances at one theater. The 48-member group performed at the Asia Song Festival at Jamsil Main Stadium in southern Seoul last month. The group’s members are constantly changing due to a popularity vote conducted among their fans.

Aside from vocals and dancing, the appearance of Korean and Japanese groups is also notable. It is part of the reason why Girls’ Generation and Kara have garnered a large following of young Japanese. The “Kara-look” is catching on with the young crowd in Japan.

“The Japanese girl groups appeal to their fans with their cute looks and mannerisms,” explained Kim Dong-joon, a music program producer at Mnet. “They mostly give off a cute, girl-next-door image. Even when you look at AKB48 or Morning Musume, they’re charming in a cute way - but offer little of anything else.

“Those in the Japanese industry often point out that Korean groups have several charming qualities. They also point out that the Korean girl groups are sexy and charismatic on stage.”

“We have been getting a lot of calls from Japan,” stated Kim Tae-song, the head of TS Entertainment, which manages girl group Secret. “Since Girls’ Generation caught on in Japan, there’s been a huge increase in interest in Korean girl groups.”

Music industry insiders say it is all about quality.

“Korean artists need to remember that groups like Girls’ Generation and Kara have done well in Japan because they have proven skill sets and not because they’re merely Korean groups,” said Jung Hae-ik, head of Happy Holic Entertainment company.

“It’s true that Korean girl groups are gaining popularity, but there are plenty of skilled Japanese girl groups,” said Hong of Amuse Korea Inc. “For example, Perfume started off as an idol group member, but gained the respect of fans as a skilled artist over the years.

“It’s a battle with quality of music at the core above all else.”