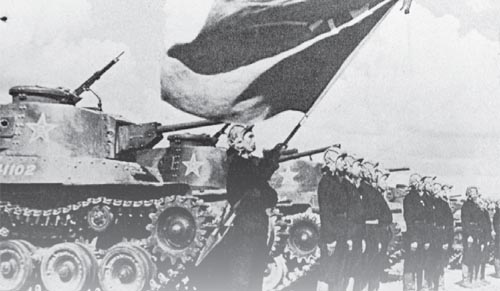 The Chinese People’s Liberation Army prepare to join the Korean War in October 1950. The PLA’s entrance was a decisive factor, forever altering the course of Korean history. [JoongAng Ilbo]


Last week, the allies were forced to retreat, losing Pyongyang to an onslaught of Chinese People’s Liberation Army soldiers.

I was to check in at the South Gyeongsang governor’s residence - the site of the South Korean provisional government at the time - as the new commander of the ROK 1st Corps based in Gangneung, Gangwon.

President Syngman Rhee was waiting for me there.

“You lived up to the honor of the ROK Army and did an excellent job of advancing into Pyongyang,” he said as he promoted me to major general.

As soon as I left, I made my way to a nearby airport and hopped on an L-19 “Bird Dog” aircraft for Gangneung, Gangwon.

At the time, the ROK 1st Corps consisted of two sub-divisions. The Capital Division had made a name for itself by advancing north of Hamgyong Province. The 11th Division, on the other hand, did not have much in the way of combat experience.

The ROK 1st Division had been equipped with the 1st U.S. Corps’ artillery and tanks, and the ROK 11th Division was outfitted with 18 105mm field guns. Much like the 11th Division, most ROK Army divisions were poorly equipped.

I was proud to be commanding my new men, but at the same time, I grew concerned about how we would hold up against the Chinese People’s Liberation Army.

After a brief period of adjustment, I had the ROK 1st Corps’ headquarters in Gangneung relocated to Jumunjin, Gangwon. The existing headquarters was stationed in an abandoned Gangneung court office. In many respects, it was more comfortable to have the headquarters located in the heart of Gangneung, but I pushed for the move to the pine groves of Jumunjin.

The staff officers were dumbfounded by my decision to part ways with a comfortable office to camp out on a remote and sandy area.

It became the norm for us to chew on sand when eating our meals. It did not take long for my men to start to complain about my decision. I was briefed on their reactions, but stood firm on my decision. As a commander, it was important for me to hold firm to my convictions.

The reason was simple: Military personnel participating in combat should not dwell for too long in urban settings. It was my philosophy that combat troops stationed in urban settings were destined to succumb to or be sidetracked by temptation. It becomes easy for the men to become complacent and get distracted in search of personal pleasure. Therefore, it becomes tough to maintain discipline - and in the middle of a war, it is important to maintain discipline.

I also had other matters of importance to tend to.

At the time, U.S. Air Force fighter planes and bombers departed from eastern South Korea to attack the North and U.S. Navy bombers also departed from two aircraft carriers in the East Sea.

If a bomber successfully carried out its mission and returned having disposed of all its bombs, there weren’t any problems. However, if they were hit by enemy antiaircraft fire or had not completed their bombing runs, the planes could not touch down on the deck of the aircraft carriers because a bomb could go off during the landing.

In such cases, a landing strip was needed in our area. Our American allies requested me to build an airport in Gangwon. It wasn’t an easy task, but it laid the foundation for what is now Sokcho Airport.

While I began tending to such matters, 10 days had passed since I took on my new duties as commander of the ROK 1st Corps. During that time, we also had to fend off occasional attacks from North Korean forces. But having been defeated once already, the enemy troops were nowhere close to the military might of the Chinese.

The North’s soldiers were not even a match for us, and crumbled under our counter-attacks. 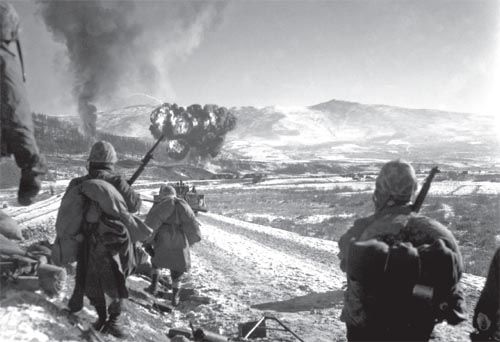 
The Chinese People’s Liberation Army, on the other hand, posed a potent threat to the ROK Army. The PLA had made attempts to seize Seoul through the western front, but had been rebuffed by U.S. troops. Eventually, the Chinese seized Seoul using their greatest asset, strength in numbers.

This resulted in another mass exodus of civilians fleeing Seoul for refuge in southern cities. However, the PLA failed to advance south of Anseong, Gyeonggi. They were stopped in their tracks by the U.S. 8th Army commanded by Gen. Matthew B. Ridgway.

The PLA participated in several key battles during the Korean War. Their participation in the war changed its tide and the fate of the Korean Peninsula.

The Chinese PLA offensive started at the end of October 1950 in Wonsan and Kunuri. ROK and UN troops were advancing north after successfully seizing Pyongyang, but were stopped fast by the PLA, which outnumbered allied troops.

The PLA then seized Pyongyang and forced the ROK and UN troops to retreat south.

With the strong leadership of General Ridgway of the U.S. 8th Army, the allied forces were able to earn a key victory at the Battle of Jipyeong-ri and regained possession of Seoul on March 15.

It was the first time the PLA had shown a limit to its capability in combat.

The PLA would attempt to gain possession of Seoul again with an all-out attack - but General Van Fleet of the U.S. 8th Army successfully defended the capital city using 400 field guns from central Seoul to Mapo, and another defensive line along Songchu, Gyeonggi.

The PLA was ready to try its luck on the eastern front.

They were looking for a weak link in the allied forces’ defensive line. As directed by Mao Zedong, they were now being selective in their attacks and were aiming at areas manned by the significantly weaker ROK troops. The ROK troops lacked the firepower and quality training of the American troops. The ROK troops also lacked the organizational skills to effectively respond to sizeable situations during the war.

The PLA were looking to take advantage of such weaknesses.

Everything east of the areas covered by the Americans was in the hands of the ROK Army. The ROK 3rd Corps was just to the east of the U.S. 10th Corps and the ROK 1st Corps, under my command, manned the area just east of the Taebaek mountain range to the shores of the East Sea.

We had not been tested by the PLA yet and did a respectable job of holding off the depleted North Korean troops. However, the central area defended by the ROK 3rd Corps was in trouble.

ROK forces in the area looked shaky and over time began to show signs of succumbing to the PLA. The Chinese took full advantage of the shaky defensive line and eventually penetrated through at Sachang-ri, northwest of Chuncheon. The ROK 6th Division, under the command of the U.S. 9th Corps had been defending the area.

The situation was getting serious.

Although the ROK 1st Corps was not immediately affected by the incident, when a point along a defensive line caves in, it can have grave repercussions for the surrounding areas.

I could not help but get nervous with each briefing from my officers. I was thinking hard about the best strategies to fight the Chinese People’s Liberation Army.