Late Park strike rescues Man U from another draw

Late Park strike rescues Man U from another draw 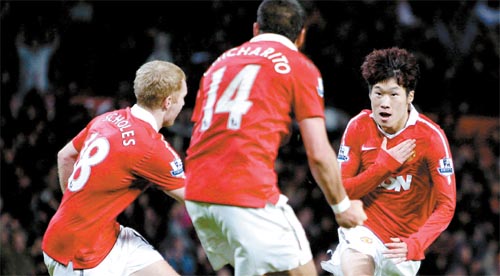 Manchester United’s Park Ji-sung celebrates after scoring the winner against the Wolverhampton Wanderers on Nov. 6. [AP/YONHAP]


LONDON - With the clock ticking towards full-time, Park Ji-sung rescued Manchester United with a superb winner to give the ailing home side a fortunate 2-1 win over the Wolverhampton Wanderers in the Premier League on Saturday.

The workaholic Korean midfielder, whose first-half effort had been cancelled out by Wolves substitute Sylvan Ebanks-Blake, drifted in from the right in the 93rd minute and planted a shot past helpless keeper Marcus Hahnemann. It raised the roof at Old Trafford and spared United a sixth draw as they try to stay on the tail of leader Chelsea, whose lead in the title race has now been cut to two points.

United’s last-gasp victory was soured, however, by the sight of former England midfielder Owen Hargreaves limping off five minutes into his first start in more than two years. Unbeaten United moved above Arsenal into the second spot with 23 points in 11 games. Chelsea, which plays Liverpool on Sunday, has 25 while Arsenal has 20, but would move back above United on goal difference if they beat Newcastle United, also on Sunday.

There were late goals too at Reebok Stadium where Tottenham Hotspur fell to earth after their exhilarating midweek Champions League win over Inter Milan, losing 4-2 to the Bolton Wanderers, who climbed above the London club into fifth. Kevin Davies scored twice for Bolton as they led 3-0 after 76 minutes before Tottenham gave themselves hope with stunning strikes by Alan Hutton and Roman Pavlyuchenko. Martin Petrov eventually killed off the visitors.

Manchester United welcomed back Hargreaves after the Canadian-born player’s battle with chronic tendinitis in both knees, but his appearance was short-lived as he hobbled off with a hamstring strain after a run down the right flank.

It set the tone for a poor United display, and the Wolves, who also conceded a late winner in their League Cup defeat at the hands of United last month, will feel unlucky not to have taken a point. With Nani injured, Michael Carrick and Dimitar Berbatov having fallen victim to an illness that swept United’s training ground this week and Wayne Rooney heading for the United States to continue his rehabilitation from injury, the hosts were toothless in attack and indebted to the lively Park.

“Right on halftime and right on the final whistle are amazing times to score,” said United manager Alex Ferguson, whose team’s trademark over the years has been late goals.

“But Ji’s in great form actually, he’s been one of our best players in recent weeks,” he told MUTV.

United had offered little before Park moved on to a defense-splitting pass by Darren Fletcher and finished with deadly accuracy in the 45th minute. It failed to inspire the home side, though, and they looked uncomfortable against a lively Wolves outfit.

It was therefore no surprise when Ebanks-Blake, formerly on the books at Old Trafford, came off the bench to silence the home fans when he rifled a shot past goalkeeper Edwin van der Sar after 66 minutes.

Things could have been worse for United when Steven Fletcher blasted over the bar for the Wolves, but as they so often do, Ferguson’s team found a man for the occasion, as Park weaved in from the right to snatch a dramatic victory. While United are the masters of seeking out league victories when not playing well, Tottenham has a lot to learn.

Harry Redknapp’s side, scintillating on Tuesday in the 3-1 win against Inter, was labored against Bolton.

“We were as open as a barn door,” Redknapp told Sky Sports. “That’s the problem away from home when you play that way with wide men, you’re too open, and we didn’t defend well enough.”