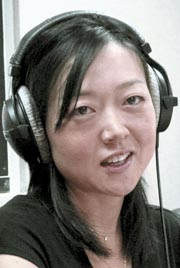 When she was imprisoned in North Korea in 2009, American journalist Euna Lee collected sleeping pills and considered committing suicide with them.

“I thought to myself, ‘If I died, my family would overcome this brutal reality,’” Lee told the JoongAng Ilbo in an exclusive interview in Los Angeles.

Lee and Laura Ling, journalists for U.S. cable-media outlet Current TV, were working on a documentary about North Koreans living in China when they crossed the border, supposedly by accident.

“I am sure that I was in Chinese territory when I was taken into custody by North Korean guards,” Lee said.

Tried for illegally crossing into North Korea, the two women were given sentences of 12 years of hard labor, but former United States President Bill Clinton made a special trip to Pyongyang to rescue them, and North Korea let them go after 140 days.

Although it has been 14 months since she returned to the U.S., Lee said she vividly recalls the 140 brutal days in North Korea.


Q. How has your recovery been?

A. Lee: I have felt gloomy since I returned home. Being in a small room alone reminded me of painful times in the prison in North Korea. I only felt recovered after one year back.

What happened when you were arrested?

We were on the eighth day of a nine-day reporting trip. A tour guide led us to the border between North Korea and China, to show us the route for human trafficking. We walked out onto the frozen Tumen River and for a very short time we were on the North Korea side.

You must have been scared in prison.

I spent four days in solitary confinement near the border with China. I could not even breathe well because the cell was so small and there was only one small window. I couldn’t fall asleep because I thought North Korean guards could kill me at any time.

The only thing that consoled me was the scent of the firewood the North Korean guards burnt. The scent was similar with what I used to smell when my grandmother was burning firewood in my youth.

When North Korean guards escorted us to Pyongyang, they stopped the vehicle at the foot of a mountain so we could get some fresh air. But we were afraid to get out of the car because we thought they would kill us outside.

How was the time in Pyongyang?

The North Korean investigators in Pyongyang really hated me [more than Ling] because I am Korean. They called me the “nation’s betrayer.”

After two months had passed in prison, I had a talk with my family on a phone. I lied to my daughter and said I was on a business trip. After hanging up the phone, I cried a lot.

Did you think you would never come home?

When I got a sentence of 12 years hard labor, I tried to file an appeal but it was the one and only judgment, which was so frustrating for me. After the judgment, I thought, “It might be better if I would die.”

Did you really think about suicide?

The North Korean guards gave me pills for the insomnia I was suffering. I collected the pills to take all of them at a time to kill myself, because I thought, “If I died, my family would overcome this brutal reality.”

But 30 minutes after I decided to go through with it, I got a parcel from my husband that contained a notebook and a letter saying, “Make a note of this experience and let’s recall this moment with a smile afterward.” Thanks to the parcel, I regained the will to live.