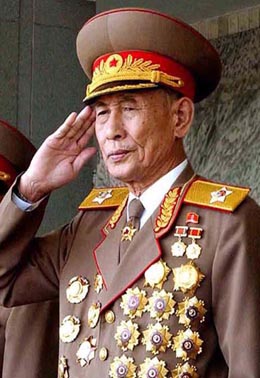 Jo was first vice chairman of the North’s National Defense Commission and held the military rank of vice marshal. His political status in the reclusive communist country was revealed when Kim chose Jo as his special envoy to travel to the United States to meet with then-President Bill Clinton in 2000.

An obituary of Jo was carried by the Korea Central News Agency. According to the report, Jo died at 10:30 a.m. on Saturday after suffering for a long time from a heart condition. Calling Jo “a revolutionary comrade loyal to leader Kim Jong-il and a prominent activist for the Workers’ Party of Korea,” the North’s media said the country has created a 170-member funeral committee to honor him, to be headed by Kim.

Despite his age and health problems, Jo retained his post as the first vice chairman of the National Defense Commission and director general of the Korean People’s Army’s Politburo during a reshuffle of the power elite in September. But he was removed from the Workers’ Party’s Central Military Commission.

With his death, vacancies have opened in the reclusive regime’s key organizations.

Born in 1928, Jo’s military career started in the Air Force. He fought in the Korean War as a pilot and after a promotion to Air Force commander, Jo was named director general of the Korean People’s Army’s Politburo for the first time in 1995.

In October 2000, Jo traveled to the U.S. as Kim’s special envoy and met with Clinton as the two countries made a rare attempt at reconciliation in the post Cold War era.

Signs of his deteriorating health were spotted since 2006 and his public activities diminished.