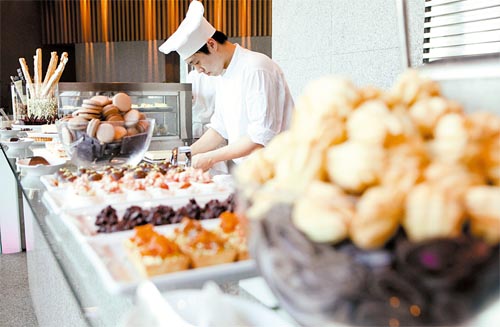 Cornerstone has become one of the trendiest restaurants in Seoul for Western cuisine. Provided by the restaurant

Get away from the busy thoroughfares of Seoul and head to Samcheong-dong in Jongo District. A hilly neighborhood between Gyeongbok and Changdeok Palaces, the area is study in contrasts: modern, ritzy art galleries and retail outlets sit side-by-side with renovated hanok homes. Recognizable by their giwa roofs, the traditional Korean houses are elegant but restrained and offer a lens into Korea’s past. Today, the hanoks in Samcheong-dong house cafes and restaurants. And just up the neighborhood’s main road is the prime minister’s official residence.

While in Samcheong-dong, dine at Sosonjae, a small, cozy restaurant in a renovated hanok. Serving elegant Korean dishes in various set menus, Sosonjae veers away from the oft spicy and pungent Korean fare for simple but flavorful traditional cuisine.

Sosonjae is run by an environmentalist couple, and much of the restaurant’s dishes emphasize natural herbs and spices found around the Korean Peninsula. Their doenjang, fermented soybean paste, has been fermented for 10 years and is used to make a classic Korean soup with rare Korean herbs and plants. The decor mixes antique Korean furniture with modern touches. 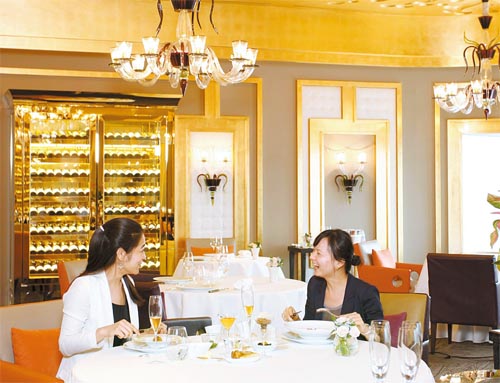 Pierre Gagnaire a Seoul in central Seoul offers the European Michelin experience if you’re not up for Korean fare. Provided by the restaurant

If a Michelin restaurant experience is more your thing, turn to Pierre Gagnaire a Seoul near City Hall in central Seoul.

Run by the three-star Michelin chef, the restaurant is on the 35th floor of the Lotte Hotel Seoul. The imported restaurant offers authentic European cuisine and a wine selection of almost 300.

Meals at Pierre Gagnaire a Seoul are usually prix fixe, with each set made up of more than 15 different dishes, including shallot compote, beef tartare, puff-layered pastries and beef brisket.

Korean cuisine and barbecue are almost synonymous to foreigners accustomed to Korean restaurants overseas. Try barbecue in the country where it originated at Maple Tree House (“Danpungnamujip” in Korean).

Maple Tree House’s top quality beef and pork have a pungent, smoky flavor, which mixes well with the vegetable side dishes. With more than 60 years of history, the restaurant retains its traditional Korean feel in its wooden interior and scenic garden.

Directions to main branch: Walk up the Samcheong-dong main road, past the Korea Banking Institute until you see a brick road leading to your right.

Cornerstone’s barbecue meat and seafood dishes, cooked in the restaurant’s large oak wood-burning ovens, have put the restaurant on the map as one of the trendiest venues for Western fare.

Located on the second floor of the Park Hyatt Hotel in Seoul, Cornerstone is known for its breakfast and brunch menus.