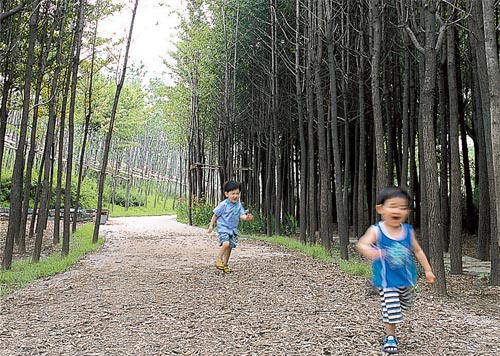 An excursion to Seoul Fortress lets you romp and play outdoors while still remaining in Seoul. [Women’s JoongAng]

Built in the late 14th century, Seoul Fortress is no Great Wall of China. But the ancient fortress wall that still circles parts of Seoul highlights the country’s long history and its story of survival sandwiched between bigger powers.

The wall once ringed the entirety of Hanyang, the historical name for the capital of the Joseon Dynasty (1392-1910).

Though much of it was destroyed by development and Japanese colonization, the city today is in the midst of restoring the fortress its surrounding areas. 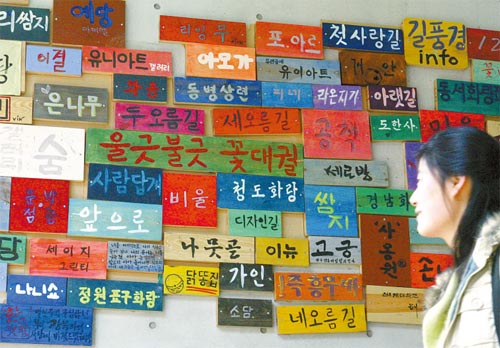 Ssamziegil in Insa-dong is all about quirk, charm and a sense of Korea’s indie scene. [JoongAng Ilbo]

For a respite from the clamor of the city, take a hike around the wall that was built around Seoul’s four mountains (Namsan, Nak, Bukak and Inwang).

Head to Mount Bukak - but don’t forget to register beforehand - for stunning views of Seoul, which show just how mountainous the Korean Peninsula is. And while it may feel like you’re outside city limits, the heavy security let’s you know the Blue House, or presidential palace, is just due south.

Directions for Malbawi Course (about 2 hours): Anguk Station, line 3, exit 2. Take green Jongno bus No. 2 to the last stop and walk to Waryong Park. Hike the old city walls for another 20 minutes to Malbawi Rest Stop.

For more information, go to www.bukak.or.kr/8_1.htm

Want a glimpse into how young upper-class Koreans play?

Head south of the Han River and visit Apgujeong and Cheongdam-dong, where high-end luxury stores and restaurants abound. Walk around Apgujeong’s Rodeo area, adjacent to the uber-luxurious Galleria Department Store, and head farther east toward Cheongdam-dong’s flagship stores. Or head south to Sinsa-dong and stroll along Garosugil.

Information for Once in a Blue Moon:

To get there, get a cab and ask the driver to drop you off at “Seoul-si Gangnam-gu Cheongdam-dong 85-1”

Experience life in a hanok by heading to the tranquil alleyways of Bukchon, a neighborhood of giwa-roofed homes that have been preserved since the 1930s.

Meaning “northern village” in Korean, Bukchon was originally a village for high-ranking government officials during the Joseon Dynasty.

Bukchon Hanok Village sits between two of Seoul’s premier palaces - Gyeongbok and Changdeok Palaces - in addition to Jongmyo Royal Shrine, where visitors can further experience the ambience of the Joseon Dynasty.

Neighborhood tour packages are available on Bukchon’s Web site. For an extended stay in old Korea, you can book a place at Rak-Ko-Jae, a boutique hanok guesthouse.

It’s easy to brush off Insa-dong as just another pseudo-traditional, gift-shop-laden street in a capital city. But Ssamziegil, a unique, 42,700 square foot complex on the main Insa-dong road, redeems the area from being a commercial cliche.

Opened in 2004, the complex was built by Ssamji Co., which has been on the forefront of Korea’s ever-dynamic indie scene in music, clothing and art.

Its quirky architectural design - its small alleyways are connected by a spiral-like stairway - allows shoppers to look around the stores with a clear view of the sky through its open roof.

Around 70 shops and restaurants, including handicraft and souvenir stores, cafes and tea houses as well as art galleries, will keep visitors intrigued.