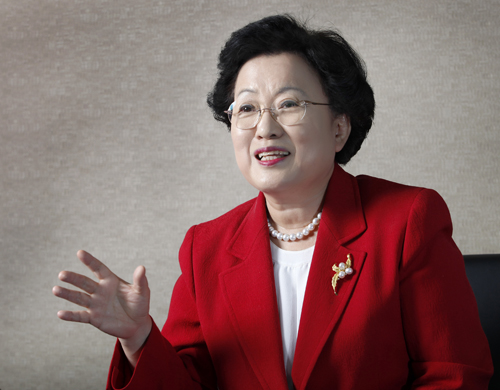 With the G-20 Summit officially starting tomorrow, chairwoman of the Presidential Council on Nation Branding Lee Bae-yong unveiled an ambitious plan to upgrade the value of Korea’s national brand.

Lee, former president of Ewha Woman’s University, said she will evoke Korea’s culture and history to enhance the nation’s brand value. The Korea JoongAng Daily interviewed Lee on Nov. 4 to talk about her plans and vision to elevate Korea’s national image.

Q. It’s been a month since you were appointed chairwoman of the council. How is the council planning to raise the national image of Korea?

A. To promote [Korea’s culture and history], we organized international volunteers, supporters, and bloggers. We embarked on a nation branding campaign to raise Korea’s standing in the world. Recently, a public service advertisement endorsed a “competitive and trustworthy Korea - a country with kind- and warm-hearted people.” It also told of the many innovative goods that were born from Koreans’ creativity.

So when you come up with Korea’s next national slogan, will it highlight history, culture and nature?

Yes. Let’s take the case of France. Some have a tendency to trust all French products, even though all goods made in France are not necessarily of good quality. I think that is because of France’s cultural power. The French government focuses on preserving its historic and cultural assets, and the effort not only attracts many tourists, but also makes foreigners trust France’s products. Although Korea has succeeded in developing economically and politically, I think Korea can’t attract as many tourists as France to its historic sites. I think we should share the value of our traditional culture - intangible assets - with foreigners to strengthen our national image.

The first branding council emphasized a “Dynamic Korea” and highly developed IT. Compared to that, your new focus harkens back to the past: old and mundane.

When that slogan was created in 2002, the image it reflected was dynamic development. Now, Korea has raised its status to a developed nation; one that is a net donor to developing countries. To reflect Korea today, we need a new phrase. We have to combine the previous slogan with a new one. We have to introduce our culture and history to gain cultural recognition. To get more global PR, we should not only publicize our culture, but also recognize and understand others by being open-minded and widening our perspective.


Many foreigners still can not distinguish the two Koreas. This phenomenon must be an obstacle for the council to enhance South Korea’s real image?

The leadership succession in the North, apparently, has had a negative impact here. Many in the world can’t tell the South apart from the North. To resolve this confusion, we have to inform the world of the differences between the two Koreas. Private citizens can help with this, as can diplomats and netizens.

Many Westerners overlook Korea - economically, socially and politically - compared to China and Japan. What do you think Korea has to do to raise its image and differentiate itself from bigger Asian countries?

When a hanbok fashion show was held in Indonesia on Oct.11, foreign visitors told me they were really impressed by the design and color of the clothes. I think we should apply those unique colors and designs to many daily necessities as well.

Secondly, Korea is friendly toward nature, whereas Japan is scared of nature, because it has suffered from so many earthquakes. So it changes nature artificially to force it into subordination. But Koreans have a deep respect for nature, because we believe we can’t live without it. When the president of Humboldt University in Berlin visited Korea, I showed him a beautiful garden in Changdeok Palace in Seoul. He complimented the harmony between humans and nature.

Third, Korean Confucianism has developed in the most creative way. Although Korea adopted Confucianism from China, scholars here developed it in a unique way. We call it Joseon Seongrihak - also known as neo-Confucianism. I think Japan knows the importance of teaching national history to its people. But Korea seems to be ignorant of educating Korean history to young students.

Foreign textbooks were found to contain misunderstandings or outdated information on Korean history.

Right. And the council also plays a role in urging them to revise those textbooks. We have analyzed textbooks of participants of the G-20 Summit and found that they had out-of-date information about Korea. But it is a very sensitive issue to ask those countries to revise incorrect content. So we first respectfully asked (publishers) to revise the information.

Some government offices have strived to boost branding. Budgets are even separated between offices and the council.

We need their cooperation. Just like how Indonesia cooperated with government bureaus to develop its national brand.


How does leading Ewha differ from taking charge of national branding?

As president of the university, I encouraged students’ creativity and personality. But boosting the nation’s brand is a much bigger task. My experience of promoting Korean culture to foreign universities as president of Ewha will be helpful. I believe globalizing Korean history and culture helps to enhance the value of our national brand.