Crack security forces are ready for anything

Crack security forces are ready for anything

Security officials trained to analyze dangerous situations work in a “situation room” in COEX ahead of the G-20 Summit. The Korean government has also been paying close attention to potential cyberattacks. [YONHAP]

Lt. Song Ho-seok was scoping out the scene recently while walking around outside COEX in southern Seoul.

“Do you see that man in the big jacket coming our way? He hasn’t fastened his belt around his waist, and that makes it hard for us to see what he might have been hiding underneath,” said Song, a member of the special forces unit specially designated to guard the G-20 Summit area near COEX, while demonstrating what he will have to keep an eye out for during the event.

“Whether it’s an old grandmother or small child, we have to be on our guard once we see something out of the ordinary. Everything can go to pieces in an instant,”

The Korean government is currently doing everything in its power to place the area under maximum security for the event, right down to the smallest details - from passing a special law for G-20 Summit security to placing display tanks containing goldfish in restrooms to assure visitors that the water is safe. 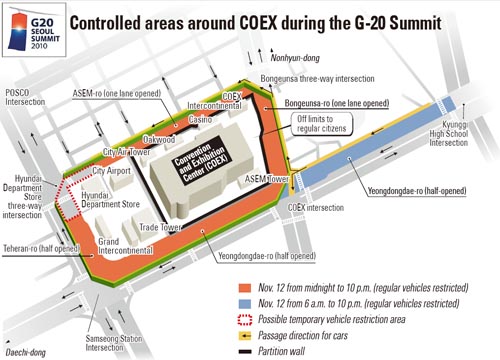 The summit that the entire nation has been counting down to all year will take place in the middle of the busiest place in the city - an unprecedented move compared with other G-20 Summit meetings.

To make sure that the world leaders, delegates and others in the area are safe during the event, three security perimeters will be in place around COEX. The outermost perimeter will have a radius of 2 kilometers (1.25 miles) with the venue in the center. The second perimeter, a wire fence, will outline four streets - Teheran-ro, Yeongdong Dae-ro, Bongeunsa-ro and Asem-ro - that intersect each other to form a rectangle around the venue.

The last and tightest perimeter will be a security wall around the entire COEX grounds. Only people with clearance will be allowed into the area during the summit. Reinforcing the perimeters will be state-of-the-art technology, including face-recognition cameras, as well as a surveillance system with artificial intelligence that sounds alarms if a terrorist or rushing car heading toward the venue is detected. Once delegates arrive in their private jets, a radius of 500 meters around the world leaders will be covered by security at all times. Helicopters will follow their vehicles in the city and security will be heightened to maximum levels at their accommodations and other stopping points.

About 60,000 security personnel are in place for the event - the largest number for a G-20 Summit. Most of them haven’t been able to go home for days because of the rigorous preparations. “I shouldn’t be saying this, but my 11-year-old daughter Hana and my wife visited during the weekend with a packed lunch. I have photos of that day in my phone. Still, when I stand guard with a live gun at my side, I forget my family - even if it’s just for a little while,” said Song.