The Seoul G-20 Business Summit, which will be held today and tomorrow, is expected to attract some of the biggest names in the international business world, with about 120 chief executives slated to discuss some of the major issues facing the private sector.

The corporate leaders represent almost every important industrial sector and amounts to a who’s who of Fortune 500 companies.

The results of their discussions will be included in the G-20 Summit of governmental leaders, which will follow tomorrow and on Friday.

More than 80 CEOs from the G-20 nations and more than 20 corporate heads from non-G-20 nations will participate in the event.

The Seoul G-20 Business Summit will mark a rare occasion in which multiple high-powered chief executives meet in a single location.

Peter Voser, CEO of Royal Dutch Shell - the second largest company in the world - will also discuss energy issues. Royal Dutch Shell will serve as a special representative for the Netherlands, which isn’t invited to the G-20 Summit because it alone is not a member.

But the two most popular names in the IT sector, Steve Jobs, CEO of Apple Inc., and Bill Gates, the founder of Microsoft, will not participate in the event. Jobs had turned down the initial invitation, while Gates, who had originally confirmed his participation, recently had to cancel his trip because of an unexpected change in his schedule.

In addition, 11 national leaders will attend the business summit, including President Lee Myung-bak of Korea, Chancellor Angela Merkel of Germany and Prime Minister David Cameron of the United Kingdom.

The business-summit organizing committee said that eight political leaders will take part in one-hour round table discussions with the corporate leaders on a range of topics, and the results will be included in a joint statement released before the G-20 Summit begins tomorrow evening. 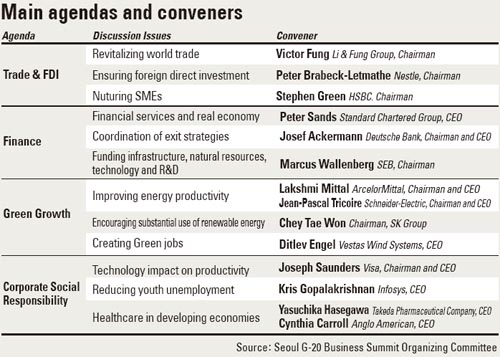