Lotus Vineyard is one of three Napa Valley vineyards owned by vintner Lee Hi-sang, whose Onda d’Oro - a cabernet sauvignon produced by his Dana Estates winery - is an official wine of the G-20 Summit in Seoul. Another wine from the same vineyard, Vasco, will also be served at the summit. [JoongAng Ilbo]


When Korean vintner Lee Hi-sang first went to Napa Valley during the late 1990s to buy land, there were few people who wanted to sell to a foreigner with no experience running a winery.

More than a decade later, Onda d’Oro -a cabernet sauvignon produced by Dana Estates, Lee’s winery in Napa Valley, Calif. - has been designated as an official wine of the G-20 Summit in Seoul.

Onda d’Oro, which means “golden wave” in Italian, will be served to dignitaries during the G-20 Summit’s opening banquet today.

Vaso, another cabernet sauvignon produced by Dana Estates, will be served to finance ministers at the summit. Vaso stands for vessel in Italian.

Dana Estates - which is owned by DongA One Corp., a local flour and animal feed company of which Lee is also the chairman - has three vineyards in Napa Valley at the base of the Mayacamas Mountains. It has become a reputable name in the wine business in the United States, with its 2007 Lotus Vineyard cabernet sauvignon earning a perfect score from famed wine critic Robert Parker late last year.

Lee Hi-sang’s Dana Estates winery has become a reputable name in the wine business in the United States. It integrates IT technology and scientific methods into its wine production.


Dana is Lee’s pen name and means “spirit of generosity.”

Lee said that he had been preparing to start a winery in Napa Valley since the mid-1990s. In the hopes of doing so, he opened Nara Food, a wine importer in Korea, in 1997.

“During my first four or five years in Napa Valley, I concentrated on getting my company’s name and my name out there,” he said.

After years of hard work and dedication in Napa Valley, which Lee said was a very “hostile regional environment” back then, opportunity knocked in 2005, when Helms Vineyard was put up for sale. After that, Lee bought two other vineyards nearby.

Napa Valley is known for fertile land with a Mediterranean climate and geology that is well-suited for growing quality grapes. Although wine from Napa Valley accounts for only around 4 percent of all wine production in California, it accounts for more than 30 percent of sales in the state. This has helped the region build a reputation as a producer of high-quality wine rivaling that of France and Italy. There are currently around 400 wineries in Napa Valley, nicknamed the “Silicon Valley of wine” by many wine experts.

Although weather and geology have made it one of the top wine regions in the United States, Napa Valley vintners do not rely on climate and geology alone to produce top-class wines. Rather, they are incorporating cutting-edge agricultural techniques based on scientific research in their wine production methods. 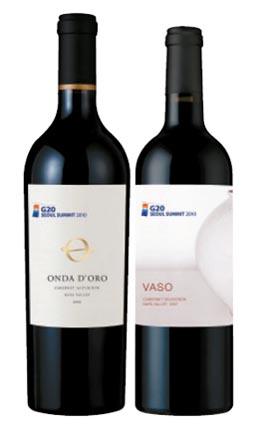 Philippe Melka, the head winemaker of Dana Estates, says that wine production in Napa Valley is selective and sensitive, because compared to other wineries that rely on machines, Napa Valley wineries utilize more time and human labor.

In step with their scientific approach to producing wine, Dana Estates now integrates the latest IT technology in its wine production methods, without compromising on quality, according to Lee.

Recently, the winery joined forces with the Electronics and Telecommunications Research Institute in Korea to start a “smart winery” business together. At the core of the enterprise are censors placed throughout the vineyard so that grape farmers will be able to obtain information about the state of the grapes without having to search the entire vineyard.

Although wine production takes an enormous amount of time and energy, Lee said he was prepared for the venture.

“I went into the business knowing that it would be a long-term investment that would require more than 10 years, instead of a short-term profit-making deal,” Lee said.