How important is summit to Korea?

How important is summit to Korea?

As the status of the G-20 Summit rises - with a huge influence on the decision-making process on international economic and financial matters - the necessity for the G-20’s cooperation with the United Nations is also growing.

The G-20 Summit is an opportunity for Korea to put its stamp on the world. But the Korean hosts are quickly learning that leading is more difficult than following.

Obama’s motto “Yes we can!” could have been Korea’s. You can; you did; you will ... There’s still more to do: Unification is the toughest peak of all. But if anyone can do it, Korea can.

Korea has been investing a large sum of its budget to raise its national brand, but the G-20 Summit will be the most powerful investment it has ever experienced.

Not only is our pride great, but also our responsibilities and tasks. This is not something the government is solely responsible for, but the people as well.

It won’t have that much of an impact on the general public. But it will have a big impact on the world press ... Now we can really be confident, invest and dedicate more energy on developing our tourism infrastructure and image.

Through the G-20 Summit, we wish that our country will become more well-known as one of the world’s central countries. Girls’ Generation will also be at the forefront in letting our country be known after the summit is over with the pride that comes from being Korean citizens.

World leaders will not only have a better understanding of the Korean banking industry but also build better relationships with Korean companies with international operations.

I hope that, by taking this opportunity to host the summit, Korea can contribute to bringing sustainable development to the world economy and that Korean firms are able to grow as global market leaders.

I am confident that the success of the summit will foster a truly “Global Korea.” It will also be a great opportunity to enhance our self-esteem and perceive our future potential. 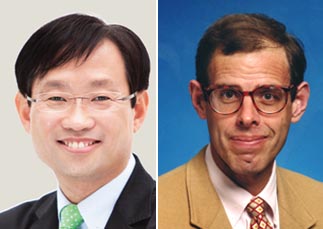 I hope the leaders can bring about meaningful results and resolve economic issues so that Korea can prove its leadership to the world and enhance its status in the global community.

Apart from all else, the G-20 Summit in Seoul cannot help but cast a glaring spotlight on the tale of the two Koreas. ... Could the contrasts in divided Korea be any more extraordinary - or telling?

The G-20 is essential in solidifying Korea’s brand, furthering the success of Korean companies in the future.

Koreans have longed to come to the center of the world from the outskirts, and now the wish has come true.