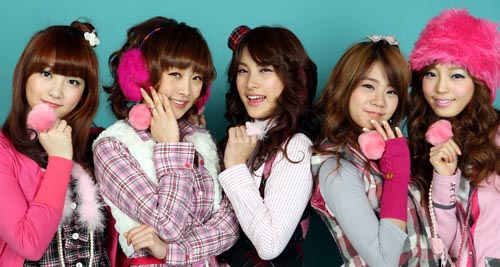 Korean pop group Kara hopes to raise their already high profile in Japan with the release of their new single “Jumping” from their latest album, also called “Jumping.” It is the group’s second single in Japan from the album. The track will be included in their fourth mini-album in Korea to be released on Nov. 16.

The title track has an 80’s Euro-pop sound.

The five-member all-girl group has witnessed positive results in Japan. They have been cast in the new show “Ura Kara,” which means “innermost feelings.” It is a reality TV show about five girls who have to complete romantic missions. The reality show is to be broadcast from Jan. 12 to Jan. 14 on the major broadcasting channel, TV Tokyo.

The group, on Nov. 1, was also picked up by one of the country’s three largest telecommunications companies, KDDI, as promotional models.

The music video for “Jumping” - which functions as a promotional campaign for a new KDDI product - was released on Friday through Universal Japan’s YouTube channel.