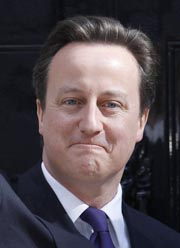 British Prime Minister David Cameron said Tuesday that Korea’s hosting of the G-20 Summit shows that the world’s leading economies view their “premier forum” for cooperation as something that now encompasses much more than its original mission of tackling the global economic crisis.

Cameron made the remark in an interview with Yonhap News Agency, stressing that the G-20 should be made into an “effective post-economic crisis institution” as the world economy picks up. This week’s meetings in Seoul, set for today and tomorrow, will be the first step toward that goal, he said.

“It’s clear that a G-20 meeting in Seoul is unique,” Cameron said, referring to the fact that Korea is the first Asian nation as well as the first nonmember of the G-8 forum of industrialized nations to host a G-20 leaders’ meeting.

“This should send a message that the entire G-20 .?.?. is committed to using the G-20 as the premier forum for global economic cooperation,” he said in the written interview.

Cameron praised the G-20 for its role in tackling the global economic crisis and said it’s time to move forward.

“We G-20 leaders together need to take the next step. The G-20 is in transition as the global economy shifts from crisis to recovery,” he said. “So it needs to establish itself as an effective post-economic crisis institution in the years to come. The Seoul summit will be the first step toward this.”

It will be the fifth meeting of the G-20 leaders since they first met in late-2008 to discuss joint responses to the crisis that was rocking the world economy at the time. The G-20 nations, which includes industrialized and emerging economies, accounts for about 85 percent of the global economy.

How to address trade and current account imbalances between advanced and developing nations will be among the top agenda items at the summit amid a currency dispute between the United States and China. Washington has accused Beijing of keeping the value of its currency, the yuan, too low to make its products cheaper abroad and worsening trade imbalances as a result.

Cameron said that the G-20 leaders “need to keep mapping out the path to strong, sustainable and balanced growth for the future, including looking at the question of how we deal with the global economic imbalances that exist today.”

Cameron also voiced a strong belief in trade as a remedy for global economic woes, calling it the “engine for global growth” and saying that promoting and unleashing it should be a top priority for the summit. He also expressed hope that the summit would produce political commitments to making progress in the stalled Doha Round of global trade talks.

In October, Korea and the European Union signed a free trade agreement, and the pact is scheduled to take effect in July of next year after parliamentary approval. Cameron said he backed the deal strongly, raising the issue with a number of other EU leaders ahead of the signing. Britain stands to gain a lot from the agreement, he said.

“I have no doubt it will make a huge difference,” he said. “From financial and legal services to green technology, our estimate is that based on current trading patterns alone, the FTA will be worth an extra 500 million pounds ($807 million) per year to the U.K. economy.”

Korea also expects to benefit from the deal, with state-funded think tanks estimating that the country’s exports to the EU will rise by $2.5 billion, and imports will grow $2.1 billion annually for the next 15 years. The deal is also expected to create some 250,000 jobs in Korea.

Cameron, who assumed office in May, has been spearheading a strong drive to cut government spending despite possible voter backlash against the move that, among other things, involves scrapping some social benefits. Had it not been for what he called the “urgent and unavoidable action,” however, the British economy would have faced “unthinkable” consequences such as high interest rates, business failures, rising unemployment and ultimately a loss of international confidence in the economy, he said.

“Healthy public finances are essential for sustainable growth,” he said. “These have been tough choices, but we are determined to make these cuts fairly.”

Prospects for the British economy are bright, Cameron said, pointing to a third-quarter growth rate of 0.8 percent and the country recently receiving a strong credit rating.

Britain is the top foreign direct investment destination in Europe. The ease of doing business there is believed to be the main reason for the move, and Britain intends to foster a better environment for companies, Cameron said.

“Now, more than ever, we’re open for trade, open for investment and open for business,” he said. “We’re intent on creating the conditions and the infrastructure that allow businesses to thrive.”

On North Korea, the British leader took a swipe at North Korean leader Kim Jong-il’s plan to bequeath power to his youngest son, Kim Jong-un, saying that he is a “strong believer in free, fair and open democratic elections.”

Cameron also said that he is “deeply concerned” by Pyongyang’s nuclear ambitions and called for progress in international disarmament talks on the nuclear standoff.

Until progress is made in the negotiations, the international community should implement U.N. sanctions on Pyongyang, he said.