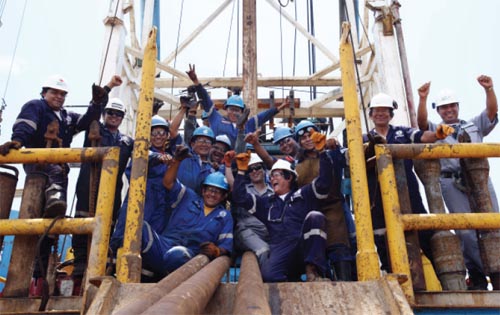 Employees of Savia Peru, which went under the control of Korea National Oil Corporation in 2009, pose for a photo.


Korea National Oil Corporation is aggressively promoting development projects in key strategic areas where there is high potential for oil resources. So, as of the end of September 2010, the corporation is working on 44 overseas oil-field projects in 16 countries. Based on its third overseas resource development plan, KNOC has set a goal to produce 300,000 barrels of oil a day by 2012, which is the criteria set to become a major regional company and secure a base to stand alone. This is just a short-term goal, though, because KNOC is planning to grow bigger in size.

After setting its policy to grow larger KNOC has continued its rapid growth by gaining 540 million barrel in reserves and producing 50,000 barrels as of June 2008.It has 1.14 billion barrels in reserve as of the end of September 2010. Oil development on its own also jumped up from 4.2 percent in 2007 to 9 percent in 2009. Recently it took over Dana Petroleum and in 2010 it is expecting to step into the 10 percent range in development rate.

Through four successful large-scale mergers and acquisitions (M&A) since 2009, KNOC is securing a firm base to grow into a global oil corporation and was able to make itself known to the global oil industry as a challenging and rapidly growing oil company.

These achievements were possible because KNOC believed that 2009, when asset prices dropped due to the global financial crisis, would be the best chance to acquire assets and carry out M&As. Based on this conclusion and despite a difficult management environment, KNOC raised a large amount of funds and actively carried out M&A projects.

It was very meaningful for our national corporate image that KNOC was able to secure large-scale reserves and production amounts competing with other national oil companies from India and China.

KNOC plans to complete its purchase of mines and large scale M&As by 2012, and plans to complete a major project to grow bigger in size earlier than expected in order to secure production and technology resources after reviewing its financial status.

In the meantime, KNOC plans to continue M&As with promising oil development companies to maximize its capability. In the short- and mid-term new investment will mostly be based in the Middle East, Central Asia and America. They will be the top priority since these regions have good investment environments and high potential for growth.

Russia, Australia, Southeast Asia and Africa are high priority regions for new businesses. In long-term KNOC plans to advance alternative oil projects such as oil sand, GTL and gas hydrate, as well as diversifying its business. It plans to raise its daily production to 500,000 barrels by 2018 and become one of top 30 global oil companies. But KNOC will not be satisfied with just this goal, and until it raises its daily production to 1 million barrels and contributes to national development and is loved by the nation, it will continue its effort.

KNOC also feels that with its current company culture, development capacity and management systems, it cannot overcome the challenges in management it faces. To achieve its strategic goal, KNOC is working toward advancing its management systems, improving its inside systems and strengthening its potential.

Change and results go hand in hand for KNOC. By evaluating through KPI and MBO to raise productivity and to grow into a global oil corporation, the company decided to incorporate a company-achievement compensation culture.

Besides an established base for advanced relationships between employees and companies, it employed foreign executives for the first time for a public enterprise. By employing foreign executives, KNOC can improve exploration and drilling success rates, all while raising human capital.