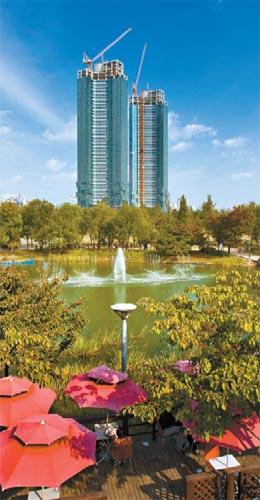 The first residents are scheduled to move into Galleria Foret in June of next year. Provided by the company

Advanced countries such as Europe and the United States boast a slew of famous parks that have come to represent certain cities in the minds of locals and visitors alike, providing people with tranquil open space to relax amid the concrete jungle.

Most people, for instance, have heard of Central Park, a 3.4 million-square-meter swath of greenery in the heart of New York City that is the pride of locals. And then of course there’s Hyde Park in London, which has a legendary reputation. Korea is hoping to develop Seoul Forest in Seongsu-dong into a similar spot. The 1.15 million-square-meter area provides a perfect place for resting and recreation along the Han River.

Hoping to enhance its allure, the government has invested 230 billion won in upgrading the park.

Each area offers a host of unique attractions and features. Culture and Arts Park - located in the center of Seoul Forest - has a main square, family area, skate park, several playgrounds and a horse-riding track. Eco Forest, on the other hand, sits in an area where the Han River and Jungrang Stream used to intersect and has a wealth of wildlife and natural surroundings.

The government’s efforts to bolster Seoul Forest are already bearing fruit, as it is quickly becoming a favorite among tourists, officials said.

Locals are also flocking to the park, not only to soak up nature but to live in the area.

Despite the economic downturn that has rattled the real estate market, the fringes of Seoul Forest have drawn a fair share of homeowners. Numerous luxury apartments circle the park for its accessibility, the educational institutions in the area, the natural scenery and solid transportation.

One of the most coveted new developments is the Galleria Foret, a multi-purpose apartment development right next to Seoul Forest. Hanwha Engineering & Construction spearheaded the project to build the structure, hoping to set a new blueprint for fine living in the city.

Apartments in the building offer sweeping views of Seoul Forest and the Han River - rivaling some of the top views in the world.

After stepping inside the apartments, you are immediately bathed in light from three sides of the rooms that look out onto the Han River, Mount Namsan and Mount Bukhansan.

Residents don’t even need to hassle with crossing the city’s notoriously busy roads to get to the park, as there’s a pedestrian walkway connecting the homes to Seoul Forest.

The area offers an abundance of leisure activities, from wind surfing and water skiing on the Han River to jogging and cycling on the many paths in the area.

The interior of Galleria Foret was designed by the world famous architect Jean Nouvel.

Nouvel said that he chose to spearhead interior design on the project because the development has ideal natural surroundings.

The first residents are scheduled to move into Galleria Foret in June of next year.

Real estate experts said 200 of the 230 units available have already been sold, a testament to the area’s allure. 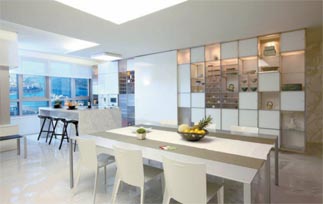 Galleria Foret is a multi-purpose apartment development consisting of two buildings located on the outskirts of Seoul Forest. Hanwha E&C is behind the project, which aims to create a new luxury hotspot in Seoul. In terms of its name, the word “Galleria” reflects Hanwha Group’s high-quality image, while “Foret” is the French word for “forest.”

The concept behind the residential portion of Galleria Foret is “V.I.P.,” which stands for view, illumination and private landscaping. The idea is to combine these three elements to create a truly luxurious living space in the heart of Seoul.

One of the world’s top architects - Jean Nouvel, who hails from France - designed the Galleria Foret with the view in mind, hoping to offer residents panoramas of Seoul Forest and the Han River. Many of the apartments offer great views from three sides, creating a nearly seamless picture of the best the city has to offer.

Galleria Foret was built to recreate the mystique of an old castle deep in a forest in Europe. Using the artistic trend of modern illumination, it is all set to become another landmark in Seoul.

Professor Massimo Venturi Ferriolo, one of the world’s leaders in the realm of residential landscaping, is playing a big role in the development of Galleria Foret. Ferriolo will head up landscaping for the project, bringing his unique style to the Seoul Forest area. As part of Ferriolo’s plan, Galleria Foret will have six main gardens. There will be one on the first five floors of the buildings, which Ferriolo says will mimic geological periods. The last one - aptly called the Sky Garden - will be on the 29th floor, which offers the best view of Seoul Forest. In addition to the Sky Garden, the project will feature a sunlight-filled “Artrium” with a glass dome in the shape of a leaf. Inside this structure will be an art gallery, an exhibition hall and a cultural center. The Sky Garden on the 29th floor will only be accessible to residents of Galleria Foret, providing tenants with an exclusive area to call their own.