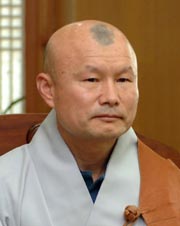 The nation’s largest Buddhist sect, the Jogye Order, appointed a new head of the millennium-old Bongeun Temple yesterday after a months-long dispute.

The former head had been embroiled in a political controversy after alleging that the ruling Grand National Party tried to oust him because he was critical of the government.

“I feel profound responsibility taking this post. It feels as if I am wearing clothes that do not fit me,” Monk Jinhwa, 49, said. “I will give my active support to the [Jogye Order’s] Administrative Headquarters and do my best for the followers of Bongeun Temple to be in harmony.”

Bongeun Temple, founded in 794, is now a major Buddhist power and a famous tourist attraction in southern Seoul.