Goals and accomplishments at past G-20 Summits:Pittsburgh

Goals and accomplishments at past G-20 Summits:Pittsburgh 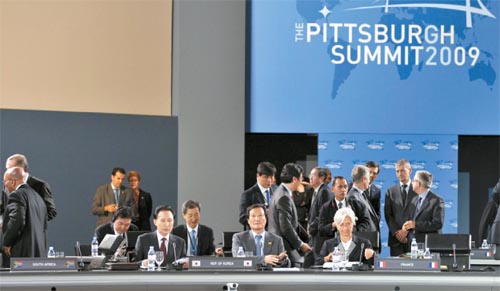 At the Pittsburgh G-20 Summit, leaders reviewed the progress made since the Washington and London.

The Pittsburgh summit produced a victory for emerging economies with an agreement to turn the G-20 Summit into an annual event and a major arena for discussing the global economy, thereby replacing the G-8 format.

Among the agenda items were pursuing exit strategies with international collaboration once economic recovery is certain, consent on the foundation of a collaborative system for strong, sustainable and balanced growth, and reform of international financial regulations.

During the summit, the United States and Europe narrowed differences on issues including limiting salaries for bankers, which Europeans pushed strongly for. The U.S. initially wanted to deal with the issue by backing higher capital requirements rather than limiting salaries.

The members also agreed to meet annually starting in 2011.

One of the major achievements at the summit was reform of international financial institutions. G-20 members committed to shifting at least 3 percent of voting power from developed to developing countries.