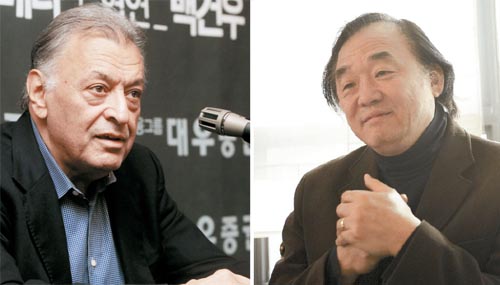 Pianist Paik Kun-woo, right, talks with the press in central Seoul on Nov. 2, while maestro Zubin Mehta of the Israel Philharmonic speaks to the press yesterday. They will collaborate for the first time Nov. 13-14. [Yonhap, JoongAng Ilbo]


Rachmaninoff’s Piano Concerto No. 3 in D Minor, Op. 30 has a special meaning for Korea’s virtuoso pianist Paik Kun-woo. When he was practicing the piece for a competition at age 15 on an empty stage in 1960s New York, the late legendary conductor Leonard Bernstein overheard Paik from the balcony. Bernstein was impressed with his level of play.

The then-music director of the New York Philharmonic, Bernstein asked his staff to help Paik get settled in the Big Apple at a time when a young pianist from Asia was a rarity. That was a huge help for the artist, allowing him to focus on entering the esteemed Juilliard School.

But Paik only learned of Bernstein’s behind-the-scenes work 25 years later, after the then-head of the competition jury for the Dimitri Mitropoulos International Competition filled him in. Paik won the Special Prize in the same year of its launch.

“[Piano Concerto No. 3 in D Minor, Op. 30] is the work that the Russian composer brought to the United States with an ambition to conquer the continent. I also prepared it before advancing into the U.S.,” said Paik at a press conference on Nov. 2.

Ever since his debut in New York in the early ’60s, Paik has performed Piano Concerto No. 3 in D Minor, Op. 30 each time he has had an important concert. “It’s probably the one that I have played the most so far. Although I have played it so many times, it feels like I can play it better next time. It also has this particular element that enables me to experience something that I can’t with other works.”

This Saturday and Sunday, the Paris-based pianist will again be playing the piece in Seoul. But this time around, he will perform for the first time with the Israel Philharmonic Orchestra under the baton of Indian maestro Zubin Mehta.

“I am aware the Israel Philharmonic Orchestra has a reputation for good strings. Israel has given birth to a lot of acclaimed violists,” Paik said on his first encounter with the IPO.

In addition to Rachmaninoff, the orchestra will perform Mahler’s Symphony No. 1 in D Major and Stravinsky’s “Rite of Spring.”

“I am happy to collaborate with Mr. Paik. Obviously, he chose Rachmaninoff because he feels quite strongly [about it.] Two of the major works [of the concert] are Stravinsky and Mahler. The two pieces are very well suited,” said Mehta at a press conference yesterday. “With the world’s leaders now in the city, I don’t know how you have time to come here to meet me. I am very grateful for that,” said the beaming 74-year-old maestro. He had just arrived from Tokyo for the press conference at the JW Marriott Hotel in southern Seoul.

Formerly known as the Palestine Orchestra, the Israel Philharmonic Orchestra was founded in 1936 when a number of Jewish musicians were laid off from orchestras throughout Europe amid the anti-Semitism of the time.

“The Israel Philharmonic Orchestra is completely different from almost every orchestra around the world. There’s hardly any government support. Economically, the orchestra supports itself from ticket sales and contributions,” Mehta said. He served as musical adviser between 1968 and 1977 and has since been music director.

“Going through a time of great crisis, there must be some similarity between Israel and Korea as far as tension is concerned,” he said. “We hope that really for your sake, one day [South] Korean orchestras will go to the North and play for them also. I remember when my brother [Zarin Mehta, executive director of the New York Philharmonic Orchestra] went with the New York Philharmonic Orchestra to North Korea. The audience stood in ovation after their concert in Pyongyang. Just like that, we would also like to play in Cairo, Amman and hopefully one day in Beirut.”

Avi Shoshani, secretary general of the orchestra, who sat next to Mehta, added that the concert “is not only playing music. It also talks about harmony, peace and friendship.”

The concert starts at 8 p.m. on Saturday at the Grand Theater of Sejong Center for the Performing Arts. Tickets start are from 70,000 won ($63) to 350,000 won. Sunday’s concert at the Seoul Arts Center’s Concert Hall will be only available to students, with tickets costing 50,000 won apiece. The remaining seats will be devoted to Daewoo Securities, the main sponsor of the concerts.