About 3,000 turn out for march in downtown Seoul

About 3,000 turn out for march in downtown Seoul 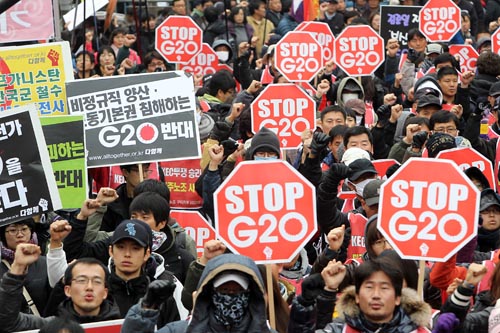 The Korean Confederation of Trade Unions and other liberal civic organizations held a joint demonstration against the G-20 Summit yesterday afternoon in front of Seoul Station. [YONHAP]

The Korean People’s G-20 Response Action, which is made up of the Korean Confederation of Trade Unions and other liberal civic organizations, led demonstrators in a 1.5-kilometer (0.93-mile) march from Seoul Station to Namyeong Station at 4:30 p.m.

Police permitted demonstrators to reach the three-way intersection near Namyeong Station, but they blockaded roads to the Samgakji Station area with police buses. Samgakji is a little under a kilometer (0.6 miles) away from the National Museum of Korea, the G-20 Summit’s gala dinner venue.

While police estimated the number of protestors at about 3,000, rally organizers said over 10,000 local and international activists participated in the march. Organizers said they would voluntarily disband after the march ended.

“Because some hard-line activists might carry out surprise demonstrations, riot police forces were dispatched to downtown areas of the city,” a police officer said.

Meanwhile, a female activist surnamed Kim tried to set herself on fire using paint thinner at 10:55 a.m. outside the east gate of COEX, the venue for the G-20 Summit.

Immediately beforehand, she shouted that she was “against the Lee Myung-bak government and G-20 Summit.” Police took her to a nearby police station for questioning.

A man surnamed Lee, 32, held a picket condemning President Lee’s four-rivers restoration project at the same place at 9 a.m., and was taken by police for questioning.

Police, however, allowed Jonathan Lee, a 12-year-old Korean-American environmentalist, to picket in front of the headquarters of the Korea Electric Power Corp., across the street from COEX. Lee’s picket called for a “Children’s Peace Forest in the DMZ,” a “Nuclear Free Korea” and a “Peace Treaty [to] end the Korean War.” Police said Lee’s picketing didn’t pose a threat to G-20 security.

A special law has banned all weekday demonstrations within a 2-kilometer (1.24-mile) radius of the summit venue since Nov. 1.

The Seoul Metropolitan Government said the number of cars in 12 areas of southern Seoul was down 7.4 percent from the previous day, from 147,655 cars to 136,688 cars during morning commuting hours of 7 a.m. to 9 a.m.