Female baduk player makes it in a man’s game

Female baduk player makes it in a man’s game 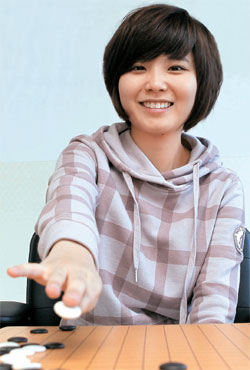 Lee Seul-a is one of a few female baduk players in Korea, but she is hoping to change that with a win at the Asian Games. By Jeong Si-jong

As one of only a few professional female players of baduk, Korean chess, in the nation, 18-year-old Lee Seul-a is a rare breed. In a competition that has always been very much a boys’ club, she has had to work hard to move up in the ranks. But she will soon have a chance to prove herself when she competes in the Asian Games, which started yesterday in Guangzhou, China.

So it was ironic that it was her looks, not her baduk skills, that brought her attention in the run-up to the games.

When a picture of Lee with the national baduk team and Olympic medalist Park Tae-hwan made the rounds on the Internet, people made comments about Lee’s appearance, saying she is “eoljjang,” which is slang for “good looking.”

But she’s not bothered by all the attention.

“I think it will help me promote baduk among young people,” Lee said. “People think baduk is only popular with the elderly, but I’m hoping that will change soon.”

Lee started playing baduk at the age of nine at the suggestion of her father. She said she enjoys the challenge of the game, which is recognizable for the small white and black stones that are moved around the board. And she hates losing. At times she has practiced so much that her hands have become slick with perspiration.

After 10 years of dedicated practice she finally earned the right to call herself a professional in April 2007. Six months later, she succeeded in winning gold as a member of the national women’s team at the international women’s baduk competition.

But for all her successes, she still has to make her way in a game where women have yet to gain widespread recognition for their achievements. As a female competitor, she earns just 10 percent of what the men do.

She is hoping to change women’s status in the game by winning a medal at the upcoming Asian Games, where baduk is being included in the competition for the first time.

“I want to break the old-fashioned image of baduk [which says that it is a man’s game] by winning gold at the Asian Games,” Lee said.

In the mixed doubles event, players compete in teams of two, and they are not allowed to talk to each other until the last piece is played at the end of the game. If they break the rule, they are out. Instead, they have to develop a relationship with their partner that is close enough that they are familiar with one another’s style.

Lee’s partner in the doubles event is Park Jeong-hwan, who is one year her junior, and they have been practicing together for the past two months.

Because the two need to work together to win, they had to get comfortable with one another in a short period of time.

“We’ve had lunch many times and now we’re just like friends,” Lee said.

To prepare for the Asian Games, Lee had to take a break from university. Instead, she goes to the Korea Baduk Association, which oversees professional players, to study and for private lessons from 9 a.m. to 6 p.m. every day.

“Now that I’m a member of the national baduk team, I want to promote this mental sport to the world and win a gold medal at the Asian Games,” she said.