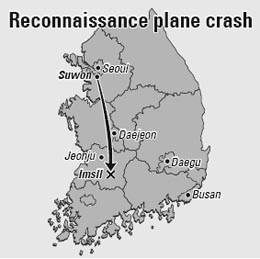 Two pilots were killed after a South Korean Air Force RF-4C reconnaissance plane crashed during a low-altitude scouting exercise. Authorities are currently investigating the cause of the accident.

“We believe that the two pilots died, as they could not get out of the aircraft in time,” an Air Force official said.

The reconnaissance plane left an airbase in Suwon, Gyeonggi, at 11:50 a.m. yesterday and disappeared from control towers’ radar around 12:30 p.m. while flying near southern Jeonju, North Jeolla, in mild weather conditions.

Remains of the aircraft were found in a mountainous area in Imsil, North Jeolla, where the plane burst into flames upon impact, according to the Air Force.

Authorities said the plane had been flying close to the ground on a routine training mission to collect information on North Korean military bases.

Air Force officials led by the vice chairman of the Joint Chiefs of Staff, Kim Yong-hong, will launch an investigation into the incident. Authorities have not ruled out any causes, including equipment malfunction or pilot negligence.

The plane that crashed yesterday was a 44-year-old variation of the McDonnell-Douglas F-4 Phantom II built in the U.S. in 1966 and purchased by South Korea in 1990.

About 20 of these planes are in operation in the South Korean Air Force, and they are a crucial part of South Korea’s information gathering on North Korean military bases.

The information gathered by the planes flying south of the military demarcation line is also used by the Army.