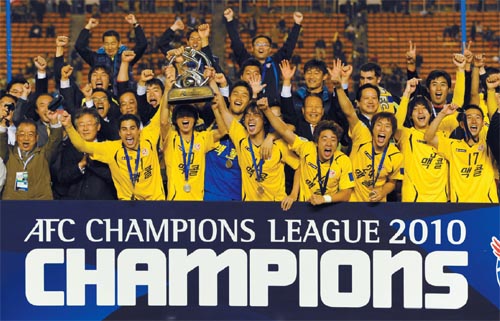 Seongnam Ilhwa Chunma celebrates its win over Zob Ahan in the AFC Champions League final at the National Stadium in Tokyo on Saturday. [YONHAP]


Seongnam Chunma Ihwa was crowned the top professional football club in Asia, defeating Zob Ahan of Iran, 3-1, at the National Stadium in Tokyo on Saturday night.

The win gives Seongnam its first AFC Champions League title ever and its first Asian title since the 1995 Asian Club Championship. It won with the help of captain Sasa Ognenovski, who scored the opening goal and won the MVP award.

Ognenovski is the first foreign player to be captain of a K-League club and he has been nominated for AFC Player of the Year honors.

The 31-year-old Australian defender capitalized on a long throw-in that happened to land near the opposing team’s net in the 29th minute.

Then Cho Byung-kuk connected on a header off a corner kick in the 53rd minute to give Seongnam a 2-0 lead.

Zob Ahan forward Mohammad Khalatbari cut the lead to 2-1 in the 67th minute before Kim Cheol-ho scored in the 83rd minute to put the game out of reach.

“To score a goal in the final and win the game is unbelievable,” said Ognenovski. “The players have been outstanding throughout the tournament. We’ve lost a few players and the youngsters have stepped in and done a marvelous job.”

This is Seongnam manager Shin Tae-yong’s first AFC Champions League title as a manager. He came up short in the K-League finals and FA Cup finals in his rookie season as a manager last year.

As a player, Shin was on the Seongnam squad that lost to Al-Ittihad with an aggregate score of 6-3 in 2004. He was also part of the team that won the Asian Club Championship in 1995.

“I’m very happy. I feel so happy, I’m almost speechless,” Shin said. “I’m even happier tonight than I was when I won the Asian title as a player. When I was young, I believed we would win and took these kinds of opportunities for granted. I didn’t think I would win the AFC Champions League title so soon as a manager.”

Seongnam will represent Asia at the FIFA Club World Cup in Abu Dahbi, U.A.E., next month. The tourney will feature other continental championships winners. The Pohang Steelers won the AFC Champions League title last season and placed third at the Club World Cup featuring the likes of Barcelona of Spain, Estudiantes of Argentina and Atlanta of Mexico.