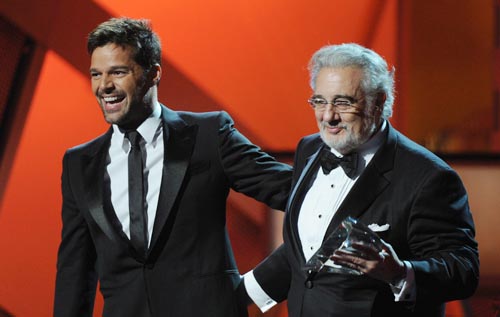 Placido Domingo, right, receives the Person of the Year award from Ricky Martin during the Latin Grammy Awards in Las Vegas on Wednesday. AFP


LAS VEGAS - Rock and pop crooners from throughout Latin America praised opera icon Placido Domingo as an inspiration to all Hispanics during a star-studded tribute concert Wednesday in Las Vegas honoring the Spanish tenor’s career.

Domingo, known to popular music audiences for his “Three Tenors” performances with Jose Carreras and the late Luciano Pavarotti, was honored as the Latin Grammy Person of the Year for his cultural and philanthrophic accomplishments during the celebration on the eve of the 11th annual awards show.

“This is a great honor for me,” Domingo, 69, told the crowd, clutching a crystal trophy to his chest as his eyes teared up. “How many people seated in this room here today deserve to be the Person of the Year. I know there are many.”

In previous years, presenters sang the top hits of the Person of the Year during the tribute concert. Domingo instead requested that his favorite singers perform the songs that drew him to a life of music.

It was a night for every musical genre. American harmony group The Lettermen crooned their 1968 hit, “Put Your Head on my Shoulder,” while country singer Alexander Fernandez serenaded Domingo with the traditional Mexican ballad “Jurame.” Jazz artist Patty Austin performed “Moon River” and Spanish performer Paloma San Basilio purred the lyrics to the classic Caribbean love song “Piel Canela.” Ricky Martin, a past recipient of the award, presented Domingo with his trophy.

But it was Domingo himself who stole the show when he stood on stage for a rousing performance of the opera standard “Granada” as images of the storied Spanish city flashed behind him on a screen.

Domingo, dressed in a classic tuxedo, drew the only standing ovation of the night.

Domingo devoted his acceptance speech to his love for the Spanish-speaking world, deeming the connection between Spain and its former colonies “extraordinary.”

“Our language, our music, our culture, our happiness is contagious and the world has been infected with that music,” he said. “Every day more people listen to our music in the world.”

Domingo also shared a tender moment with his son.

“If I had the choice to sing like you or be like you, I would prefer to be like you,” said composer Domingo Placido, Jr. before embracing his father.

“He is an inspiration for all of us Latinos,” said Syntek, who performed Puerto Rican pop star Luis Fonsi’s “Aqui Estoy Yo” during the concert. “He is a legend.”

Domingo moved at the age of 8 from Spain to Mexico City, where he studied at the National Conservatory of Music. In 1968, he debuted with the Metropolitan Opera in New York.

He founded Operalia, a contest for opera singing, and raised million of dollars in benefit concerts for victims of disasters such as Mexico’s 1985 earthquake and Hurricane Katrina.

The great maestro has made more than 100 recordings and has won nine Grammy Awards and two Latin Grammy Awards. He also maintains a busy schedule as a restaurateur and director of two opera companies, the Washington National Opera and the Los Angeles Opera.

Domingo underwent surgery to remove a cancerous polyp from his colon in March, but quickly returned to the stage.