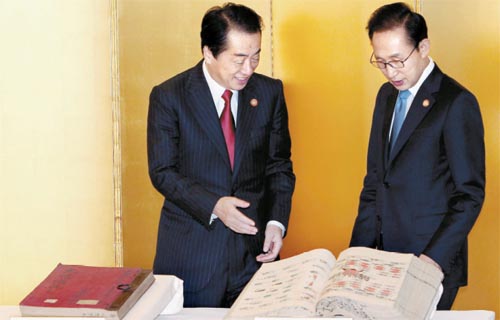 
Korea and Japan signed a treaty yesterday confirming the return of 1,205 Korean royal books - including the Uigwe - taken during Japan’s colonial rule of Korea and kept at the Imperial Household Agency.

The signing of the treaty by the two countries’ foreign ministers was the highlight of a Korea-Japan summit held on the sidelines of the Asia-Pacific Economic Cooperation meeting in Yokohama over the weekend. Korean President Lee Myung-bak and Japanese Prime Minister Naoto Kan observed the signing.

“The return of the books confirmed to us the willingness of the Japanese government to improve the Korea-Japan relationship by building a future-oriented friendship and cooperation,” said Lee. “We expect this to be a new starting point for cooperation and exchanges in the cultural area, including cultural heritage, between Korea and Japan.”

Kan also called this year a turning point for relations with Korea, and said, “We see [the two countries opening] future-oriented relations through the signing of this treaty.”

In August, to mark the 100th year of Japan’s annexation of Korea - which began 35 years of colonial rule - Kan promised to return the Uigwe and other Korean books. The Uigwe is a collection of documents containing information and illustrations on Joseon Dynasty royal customs.

Kan said he will do his best to get the Japanese Diet’s approval of the treaty. Korean parliamentary approval is not required.

According to the Ministry of Foreign Affairs and Trade, the treaty stipulates that Japan return the books within six months of the treaty taking effect.

The list of Korean books Japan promised to return include 167 volumes of the Uigwe, as well as one volume of the Daejeonhoetong legal code, 99 volumes of the Jeungbomunheonbigo encyclopedia and 938 books taken from the Joseon royal library called the Gyujanggak.

At the summit, Lee and Kan also exchanged views on progress in Kan’s other pledges in his Aug. 10 statement, especially regarding assistance to ethnic Koreans left in Sakhalin - now part of Russia - and returning the remains of Koreans who died there. More than 100,000 Koreans were forced to work on Sakhalin Island during the colonial period, before Japan lost the territory.

The two leaders also agreed to revive “shuttle diplomacy,” diplomatic jargon for a series of a bilateral summits held in each of the two countries. Kan requested another visit by Lee within the year to discuss issues such as a free trade pact. Lee said he will consider it positively, the Foreign Ministry said.