Students revisit past in Korea-Japan exchange

Students revisit past in Korea-Japan exchange 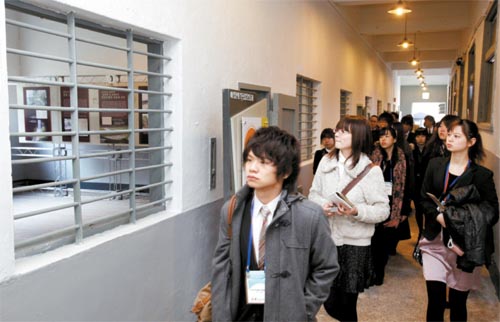 Japanese university students traverse the corridors of Seodaemun Prison History Hall on Wednesday. The prison was where numerous Koreans were arrested and held under Japanese colonial rule. By Jeon Min-gyu


Seodaemun Prison in Seodaemun District, central Seoul was where Japanese authorities locked up Koreans who resisted colonial rule some 100 years ago.

A century later, the prison is a pilgrimage site for Japanese wishing to learn the reality of the past and to show remorse.

Last week, 27 Japanese students in their early 20s gathered in front of a monument to Korean patriots outside Seodaemun Prison History Hall. They were a delegation of Japanese university students who landed in Seoul Tuesday for a 10-day Korea-Japan youth exchange program hosted by the Korea Foundation.

It is an annual event that has been supported by the foreign ministries of both countries since 1972 - the two countries agreed to support the event a year earlier a joint ministerial conference.

Every year since then, both countries have invited university students to visit and about 20 student delegates made the trip until 2001, when the number was expanded on both sides to 30 each. This started with the Korea- Japan Joint Future Project’s second meeting in 2002.

The visit to Seodaemun Prison came a day after the students’ arrival, and the young Japanese were solemn but keenly alert as they absorbed the grievous past, viewing underground torture chambers, cells and an execution ground.

“I studied [Korean] history in Japan before I came here,” said 21-year-old Yumiko Maekawa from Nagoya University. “However, coming to see the reality is a whole different story. I could not help but feel the brutality. A sense of sadness lingers in my heart, pondering how man could treat other men in such a way.”

A true gasp of the past, especially injustices, can only come when you manage to put yourself in other people’s shoes. That is what the youth exchange program is devoted to.

“Students come to the other country and have a chance to experience history, culture and society,” said Ikuhiko Ono, director of the program and a senior regional coordinator at Japan’s Ministry of Foreign Affairs. “The purpose of the program lies in nurturing students who have a keen interest in the relations of the two nations.”

Apart from the Seodaemun Prison visit, the students have a comprehensive schedule before they go back to Japan on Nov. 18, including a DMZ tour, making kimchi and pottery, homestays at Korean houses for two nights and meeting students at Korea University and the Hankuk University of Foreign Studies.

Professor Park Cheol-hee, a Korea-Japan relations expert at the Graduate School of International Studies at Seoul National University, dubbed the exchange program “a stage to sow the seeds for the Korea-Japan network,” by allowing Japanese students to see different aspects of Korea from a comprehensive standpoint.

“I would like to know what kind of difference exists in terms of historical understanding between Korean and Japanese students,” Maekawa said.

“Afterward, I will work hard to come up with a shared historical understanding with Korean friends in order to walk together toward the future,” Maekawa added.

What will the Korea-Japan relationship be like 100 years from now? Or what do younger Japanese hope the relationship will become?

“We come to the present after a hundred years of history,” said Kenta Uzumaki, 22, of Rikkyo University.

“Although the relationship between the two countries has improved, there are still things remaining which people hesitate to talk about. In the next 100 years, I hope we become deeply understanding of each other and make each other an indispensable partner,” Uzumaki added.

A Korean delegation will travel to Japan from Nov. 23 to Dec. 2.