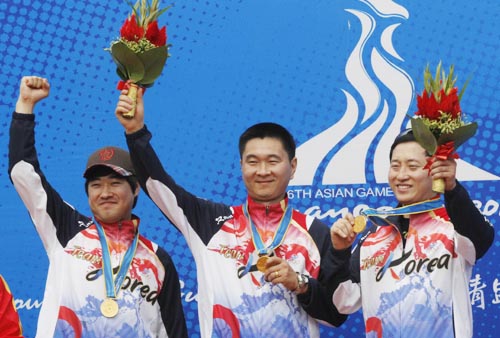 
Kim Hak-man earned two gold medals as the national shooting squad continued its strong performance at the 2010 Guangzhou Asian Games. Kim teamed up with Kim Jong-hyun and Han Jin-seop to win the men’s 50-meter rifle prone team event and set a new Asian record. Kim Hak-man then went onto earn another gold in the individual rifle prone later in the day. 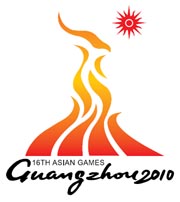 The three Korean shooters all ranked in the top three in the qualifying rounds, but Kim was the only competitor of the three to reach the podium.

“I did not perform my best in the finals and I think that was the case with the other shooters as well,” said Kim in a post-match interview. “I just think that I was a bit more lucky today.

“Having earned a gold medal in the team event earlier in the day, I didn’t feel as much pressure going into the individual event.”

The women’s team, consisting of Kim Jung-mi, Kwon Na-ra and Lee Yun-chae, also placed first in the 50-meter rifle prone event. Korean shooters combined for a total of 1,775 points to defeat Thailand (1,763) and China (1,760) in the finals.

Wang Chengyi of China won the women’s individual 50-meter rifle prone event and none of the Korean female shooters won individual medals on the day.

The men’s 25-meter rapid-fire air pistol team also won a silver medal to bring the total to three gold and one silver medals on the day. In four days of competition, Korea has earned eight golds, two silvers and two bronze. Korea has already surpassed its previous best of seven golds earned at the 1986 Seoul and 1994 Hiroshima Asian Games.

Korea has been dominant in the judo event at the 2010 Asiad with Kim Soo-hwan (over-100 kg), Hwang Hee-tae (under-100 kg), Kim Jae-bum (under-81 kg) and Kim Joo-jin placing atop their respective weight classes. Wang and Kim Kyu-wan, who earned a bronze in the under-90 kg division, are the only male Korean judokas to fail to earn golds.

On the final day of judo competitions today, Korea has another strong candidate in Choi Min-ho in the under-60 kg division. Choi is a 2008 Beijing Olympics gold medalist.

In the women’s events, Kim Jan-di came up short against Kaori Matsumoto of Japan in the under-57 kg division to earn a silver medal, and Kim Kyung-ok won a bronze over He Hongmei of China in the under-52 kg class.