Rupert Everett is back in ‘Wild Target’

Rupert Everett is back in ‘Wild Target’ 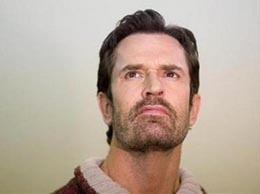 He then starred opposite Madonna, another real-life pal, in “The Next Best Thing,” and received rave reviews for his inspired turn as the witty and naughty Algernon “Algy” Moncrieff in the 2002 film “The Importance of Being Earnest.”

Despite voicing characters in the animated blockbuster “Shrek 2” and in “The Chronicles of Narnia: The Lion, the Witch and the Wardrobe,” Everett has kept a fairly low profile in recent years, especially in public.

Now, he is back in a new British comedy, “Wild Target,” currently playing in U.S. theaters. Directed by Jonathan Lynn (“My Cousin Vinny”) it stars Everett as an art-loving thug who buys a Rembrandt only to discover it’s fake.


Q. Isn’t Wild Target based on a French film?

A. Yes, but it’s a very English film the way it’s done and reminds me of the old Ealing comedies. It’s got the charm and characters and a fabulous cast. Emily Blunt, who was in “The Devil Wears Prada,” is a fantastic comedian - she’s the one who cons me with the fake, and there’s Bill Nighy and Eileen Atkins. I didn’t actually know any of them, but we had a great time together.

You seemed to have a lot of fun playing Ferguson, this art-loving gangster.

I did because it’s so well-written and Jonathan is so good with comedy. Ferguson’s this typical old-school villain with no morals at all, and he’s rather ridiculous, quite funny, and extremely angry. Villains are always more fun to play.

Is it true you were offered the film just a week before shooting began?

Yes, it all happened very suddenly. I’m usually quite indecisive, so it’s much easier when you don’t have too long to think about it and worry.

You’ve been out of the spotlight in recent years. Is it because of your indecision with roles and projects?

No, it’s just that I haven’t found any good roles recently, and roles that are available. Our choices are always dependent first on what’s out there, and in slow times you have to jump on the good things when they come along, like this one.

And acting is always a pretty precarious profession.

Exactly. It’s very unstable, no matter who you are and how successful you are.

Do you ever get dispirited?

No, but I do feel it’s a very weird way to make a living. It’s ideal for someone who’s very young, as you have to retain inside of yourself the outlook and spirit of an 18-year-old to cope with it because that’s only time in your life really when life is pure fun. At that age, anything is possible. But, say you’re a 65-year-old actor running out of the house to go to an audition on a bus, without thinking twice that, for a man of 65, it’d be much nicer not to be living on that kind of knife edge, then it’s exhausting and draining.

Where do you live now?

London. I was in New York for the last four years, and then my father became unwell and I wanted to be closer, so I moved back and I love it.

You’ve also written several books, including “The Hairdressers of St. Tropez.” Are you still writing?

Yes, I’m busy writing a television series called “Boy Band,” about a boy band, and the second part of my autobiography, titled “Goodwood, Pinewood, Hollywood and Bollywood.” And I’ve written a script about Oscar Wilde that I’m going to direct and act in, as Oscar. It’s set in Paris and Italy after he came out of prison. I’m dealing with financing, which takes forever.”

You’ve always been a huge Oscar Wilde fan, haven’t you?

Huge! He’s a genius. It’s a great story to tell and the whole story of his life is very moving to me, being such a big star, being such a snob, and at the same time showing off his genius too much. I think he was probably a fairly unpleasant man. I imagine him as this very clammy, overweight man with sausage-like fingers and bad breath, and really, really pleased with himself, wearing those hideous violin-shaped suits he invented. And then there’s the sheer craziness of him. I’m a bit nervous about directing for the first time, but excited.