Rebuilding a life one note at a time

Rebuilding a life one note at a time 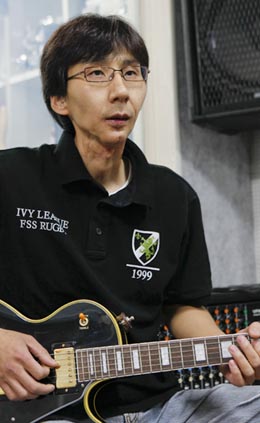 When Cho Han-seo had his first operation to rid himself of tongue cancer 11 years ago, the then 28-year-old was forced to miss his son’s first birthday. It would be the beginning of a half-decade struggle for survival.

The 26-hour operation was a success - in that the cancer cells were no more - but surgeons were forced to remove his entire tongue and 80 percent of his jaw bone. Only two molars were left inside his mouth.

Cho, now 39 and working full time again, pointed at his left chest and said he does not have any muscle there. Surgeons used it to construct a new tongue and his new jaw bone was reconstructed using parts of his left calf.

The 1999 operation was just the first of many major surgeries Cho had endured that brought him from near-death to where he is now.

Now he can walk, but said he is not able to maintain physical activity such as running and hiking.

Scars still mark Cho’s face and neck, and when he speaks, people have to listen carefully because of his inconsistent pronunciation.

Cho strummed his guitar strings with his pick as he talked to the reporter. Cho is the lead guitarist for Take a Flight.

The band competed against 49 other groups to earn a spot in the Second Nakwon Worker’s Band Contest. Take a Flight was one of eight bands that made it to the final round, which was held on Oct. 23.

More than 400 people gathered around the stage and clapped to the rhythm as Cho’s melody of “Long Train Running’” by The Doobie Brothers rang through the concert hall. Take a Flight’s second tune, “Play That Funky Music” by Wild Cherry had the audience clapping and waving their arms as blue and red lights beamed over the band and white smoke was sprayed over the stage.

“It wasn’t completely perfect, but I think it was at least 80 to 90 percent perfect. I got the rhythm a bit faster than it is supposed to be,” said Cho after their 10-minute set.

“I often get too excited and sometimes miss the beat. So I’m listening to the beat of the songs we are going to play on the stage,” said Cho before he got back on stage. 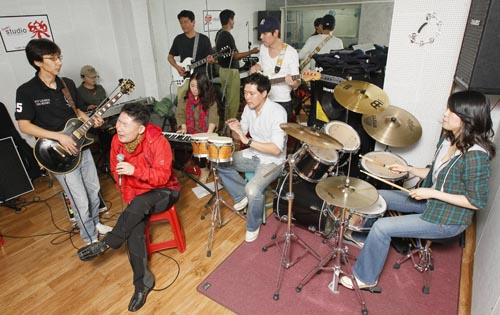 Cho Han-seo’s band Take a Flight practices in their studio. By Shin In-seop

Entering the fourth year of his career as a computer repair technician in 1997, he noticed something was wrong. “I had a terrible headache, and when I was drinking, my tongue got stiff,” said Cho. “You know how your tongue goes numb when you are drunk? I was getting that just after a couple of shots.”

When Cho eventually got himself to the doctor, the diagnosis was tongue cancer.

“I was a heavy drinker and chain smoker, but I never expected it was going to catch up to me so soon,” he admitted.

The road to recovery was long and painful.

Until he got reconstructive surgery in 2005, he had almost no jaw bone left and the lower part of his face was completely collapsed in.

In fact, until the mid-2000s, he was not able to eat on his own and had to be nourished through a plastic tube. By 2005, he had recovered to the point where he could eat porridge and soup.

As is to be expected, treatment was extremely expensive.

Monthly hospital bills were millions of won - but he was not able to work at the time. He had to downsize his apartment.

To make matters worse, Cho’s medical and financial issues put a huge amount of strain on his marriage and he ended up getting divorced.

“I looked horrible,” said Cho. “I couldn’t even imagine stepping out of my house. I was depressed and was afraid to be social to the extent where it became a phobia.

“Tongue cancer is a bad prognosis,” said Cho. “I watched on as many people left the ward dead. Phew. No one knows how it feels to watch people die next to you - unless you go through it.”

Refusing to be another statistic, he vowed he would not leave the ward in a casket. Cho promised himself he would pursue his passion - music.

How music changed his life

Down and out, Cho turned to music to bring him back to the real world.

He bought a secondhand guitar from the Internet. Cho wasn’t starting from scratch since he had taken guitar lessons in his high school days.

But his physical appearance kept him indoors for the most part.

“I wanted to get proper lessons, but I couldn’t go out with the awful face I had, so I learned from video clips on the Internet,” said Cho.

Because he had to eat through a tube, Cho did not build up the confidence to go outside until 2005. He thought, “Now that I don’t have a tube attached to me, maybe I’m ready to get outside.”

He looked for guitar lessons, but they were all too costly. Soon after, he found Obbligato, a social live-music club for nonprofessionals in Seongnae-dong, Gangdong District.

“The experienced members give lessons for a low price,” said Cho.

Being isolated from most of society for more than half a decade, Cho was petrified about the idea of joining Obbligato.

“Is it okay for me to join a nondisabled group? Wouldn’t people be repulsed by my looks? Can I do well? I was afraid,” said Cho. “But I had a strong passion for music.”

His life started to pick up again.

Cho gained confidence from playing in the band, and he even got his first full-time job since being diagnosed with tongue cancer seven years prior. He got a job with traffic utility manufacturer Ian C&S Co. in April 2006. He had been telecommuting for years, working part-time, and decided it was time to get back into a regular work environment.

He said he will never forget his first live performance in the fall of 2006. Around 40 musicians from Obbligato and other bands got together at a small theater in Sinchon-dong, central Seoul.

Even after the tremendous progress he had made - reconstructive surgery, gaining a full-time job and joining a band - Cho trembled with fear at the thought of getting on stage.

“I just thought, ‘don’t mess up,”’ Cho said. “I could feel individual sounds from every instrument. I was in the zone. I felt the sounds intensify and harmonize, coming together to make music. I was completely overwhelmed.

“I will never forget the intense, pleasant feeling that overcame me that evening,” said Cho. “This is why I love music.”

The band members have changed over the years. It’s been a challenge at times to keep the band together. Because of business trips and new jobs, Take a Flight has had all sorts of members come and go, but Cho and Chun have been the constants.

When Take a Flight gathered on Oct. 23 for the Nakwon Worker’s Band Contest, they ultimately lost out on the top prize.

Cho said he was not disappointed.

“It’s okay, I’m not here to win awards, anyway,” said Cho. “I just love the feeling I get before going on stage. It had been a long, long time since I had been able to feel something like that.

“It wasn’t that long ago that I was stuck in a hospital bed unable to feed myself. Now I work full-time again, I can eat and I can play music. What else can I ask for?”