A fearful ritual in any era

A fearful ritual in any era 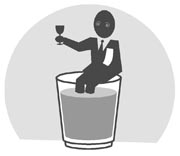 Sometimes, being a heavy drinker can be a virtue. Your capacity for drinking can help you find a job or keep it once you have one. Koreans are known for their drinking. But we’re not alone.

Ho Hye-il, a North Korean security guard during the inter-Korean summit who defected to the South, wrote in his book “North Korean Show Box” about a government official known for his drinking. The official would drink eight 750-millimeter bottles of 80-proof ginseng wine all at once without much effect. He even seemed sober after drinking six liters of hard liquor. His drinking capacity even got him appointed as ambassador to an African nation. When it was discovered that the president of the African country loved drinking and favored ambassadors based on their drinking, the North Korean official was hired. Upon his appointment, he pledged to “drink until my last day to serve the party.”

In ancient times, the ministers must have had a hard time when the king they served loved to drink. China’s King Wang Yanxi of the Ming Dynasty punished or killed anyone who couldn’t keep up with his voracious imbibing. In Korea, King Taejong of Joseon also intimidated his vassals, saying that anyone who got drunk before he did would have to resign. Those who didn’t drink had to put on a good show and pretend to drink up.

Du Fu described Li Shizhi, a minister under Emperor Xuanzong, as “drinking like a whale swallowing a hundred rivers.” Jeong Cheol-jo, a Joseon-era scholar, had his own style. He mixed raw rice wine with soju in a big bowl and called it the “drink of chaos.” And so it was.

But before you drink, you need to know your limit. At the traditional coming-of-age ceremony, your senior says, “Alcohol is fragrant, but if you drink too much, your body will suffer. Know your limit and drink responsibly.” The honoree pledges to remember what was said as he throws back his first shot.

Even if you know your limit, the hard part is sticking to it. Recently, photos of Chinese college students lying on the street made news after it was found that they were part of a “drinking interview,” in which a company tests the drinking capacity of its applicants.

More and more Korean companies also include the drinking test as part of their interviews to evaluate potential new hires. It must be a fearful trial for those who don’t drink. My advice: do as the ministers did and get on with the show.