Korea is a lot like Peru, says President Garcia

Korea is a lot like Peru, says President Garcia 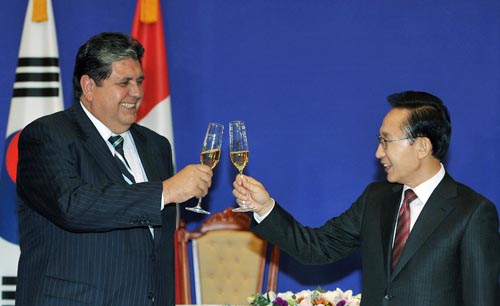 Garcia also said that the FTA will help the South American country develop its abundant natural resources, adding that Peru will become an avid student of Korea’s economic development experiences. Garcia attended a press conference at the Grand Hyatt Hotel in central Seoul after observing the initialing of the Korea-Peru FTA. Officials expect the final signing to take place early next year.

The FTA, Korea’s second free trade pact with a Latin American country, was concluded in late August in Lima. The Korea-Chile FTA, signed in 2003 and implemented a year later, was the first for Korea in South America. According to the Ministry of Knowledge Economy, Peru is the world’s largest producer of silver, second largest of zinc and third largest of tin.


Q. What benefits do the Korea-Peru FTA bring to both countries?

A. For Peru, Korea is a large market. To begin with, the FTA will be a big help for exporting (Peru’s) fishery products. Introducing Korea’s technologies to produce products of high value and to advance into other markets is another strategy for Peru. For instance, Peru can export processed fishery products made with Korean technology. These products will be competitive not only in Korea but also in other countries.

Korea also will be able to use Peru as a stepping stone for selling its electronics products or cars in South America. In Peru, public awareness of Korean companies such as Samsung Electronics, LG Electronics and Hyundai Motor is very high. They have price competitiveness over products of the same quality.

What do you expect from Korean companies for developing resources in Peru?

What’s the appeal of Korea over China or Japan?

China has a huge population and a large and complicated economy. But Korea is very similar to Peru. For a country pursuing development like Peru, Korea is a very good partner. Because we are located in the middle of Latin America and have optimum port facilities, Peru can play a role for Korean companies looking for places to invest in Brazil (the largest market in Latin America).

Many Latin American countries are ruled by leftist governments. What do you think of them?