TPP: An opportunity and challenge for Korea

TPP: An opportunity and challenge for Korea 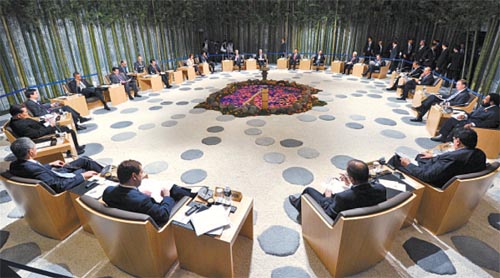 Leaders sit at the start of the 18th Asia-Pacific Economic Cooperation Economic Leaders’ Meeting in Yokohama, Japan, on Saturday. [NEWSIS]

To some, the TPP is a potential weapon to be used against Korea by its competitors. Others call it a lot of free trade smoke that will never amount to anything.

The TPP, signed by Singapore, New Zealand, Chile and Brunei in 2005, now has five other countries negotiating to become members: the United States, Australia, Peru, Vietnam and Malaysia. Designed to economically integrate the Asia-Pacific rim, the goal of the pact is nobler than usual bilateral FTAs: it targets eliminating tariffs to zero among the member countries by 2015.

Still, the existing members and countries negotiating to join, now led by the U.S., are hoping to attract more members to make the multilateral trade platform the most appealing free trade deal.

On Sunday, the nine countries gathered for their first-ever TPP summit on the sidelines of the APEC meeting in Yokohama. The TPP summit, the White House said in a statement released afterward, reiterated “their goal of expanding the initial group of countries out in stages to other countries across the region.”

Meanwhile, Japan and Canada are considering whether to join TPP negotiations. In particular, Japan is known to be viewing it with interest as a way of catching up with rival Korea, which is considered the world’s third largest economy in terms of the free trade deals it has signed.

President Lee Myung-bak, in an interview with the Asahi Shimbun on Sunday, said Korea is also considering the pact.

“The government appears to have judged that that’s a better stand than being negative about pact, whose real impact is yet to be known,” said Kim Han-sung, a senior researcher at the Korea Institute for International Economic Policy.

The possibility of the pact further expanding its membership is also driving countries to calculate the benefits and costs of being part of it.

The leaders of the 21 APEC members in Japan over the weekend pledged to create a vast free trade area in the Asia-Pacific, and the TPP is one way of getting there - although the TPP is not an APEC initiative. The Asia-Pacific region accounts for 44 percent of the world’s trade and 53 percent of global economic output.

Despite the potential benefits for Korea, however, some analysts said that Korea should prioritize its bilateral FTAs.

Jung In-kyo, an economics professor at Inha University, said the TPP is currently more political rhetoric than a trade pact with real benefits.

“It is a bid by the U.S. to keep at bay Asia-initiated economic integration in the region and maintain influence over Asia by going for wider integration,” he said.

The U.S. has stressed that the TPP - the first trade agreement initiated under the Obama administration - will be crucial to meeting its goals of doubling exports in five years and creating a significant number of jobs.

“The United States risks losing its export share in an exploding market and ceding influence in the Asia-Pacific unless it is able to participate more vigorously in regional trade,” read a June 14 statement by two U.S. senators, including John Kerry, chairman of the Senate Foreign Relations Committee. “TPP represents an excellent opportunity to change this dynamic and build a platform for region-wide economic integration.”

The complexities of issues still under negotiation among TPP members, including how to make the TPP compatible with FTAs, is also reason for Korea to wait, experts say. Most TPP members have signed or are negotiating FTAs with Korea.

Opening up the agricultural market is another challenge.

“The TPP requires tearing down tariffs in all areas including the agricultural sector and can Korea do that now? I don’t think so,” said Park Bun-soon, an economist at Samsung Economic Research Institute. “Korea doesn’t seem ready for the TPP.”