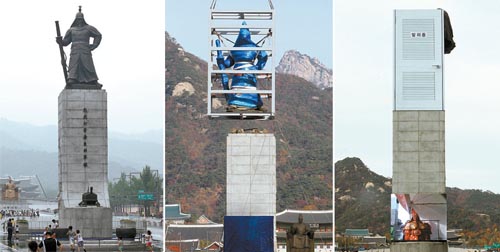 The statue of Admiral Yi Sun-sin, left, which has become a famous landmark in the Seoul cityscape, has been replaced by an installation created by Yi Je-seok. The statue will return to the plaza on Dec. 22 after a 40-day repair and reinforcement project. [YONHAP]


Visitors to Gwanghwamun Plaza will not see the statue of Admiral Yi Sun-sin, which has become a famous landmark downtown. It was moved on Sunday for repair and refurbishment - the first time the statue has been moved since it was erected there more than four decades ago.

In the statue’s place is a strange box that looks like a white fitting room. A suit of bronze armor hangs over one wall and the sign on the door reads “tal-ui-jung,” which means “now disrobing.”

The installation is by Yi Je-seok, 28, a well-known commercial artist who has won many advertising awards from such prestigious institutions as Cannes International, Clio and the New York Festivals.

“With this piece, it looks like Admiral Yi is changing in a dressing room,“ explained Park Sang-hui, an official with the city’s urban planning bureau. “We had initially planned to set up a rectangular column with actual-size photos of the statue on all four sides. Depending on the reaction to the installation, we could revert to our original plan.”

Around 20 bloggers on the nation’s biggest portal Naver wrote about the installation on their blogs, saying things like “It’s so funny” and “A sparkling idea.”

Most of the comments were favorable. But one blogger wrote, “The installation is meant to be witty but I don’t like it. I wish [the artist] had considered the meaning of the statue more seriously.”

The statue returns to the plaza on Dec. 22 after repairs and reinforcement.