The changing reality of Korean TV

The changing reality of Korean TV 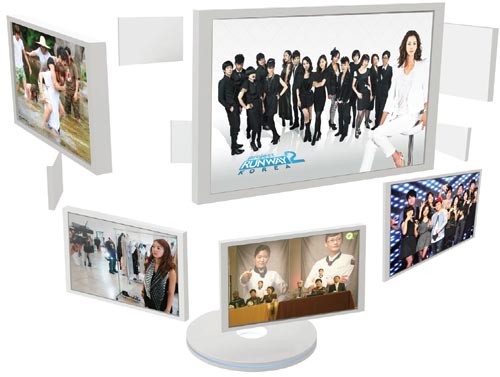 Nam Yong-sub was flipping through TV channels on a wintery day two years ago when supermodel Lee So-ra made him a life-changing offer. “I was eating alone at home. As soon as I saw the commercial for ‘Project Runway Korea,’ I thought finally, this is my chance! I put my chopsticks down and submitted my resume immediately,” said Nam, who placed second in the first season of the fashion reality show with Lee So-ra as its host. Project Runway Korea is the Korean version of the original American show, Project Runway, which airs on Bravo.

At the time, Nam, now 31, was an ordinary employee at local fashion brand On&On’s development division and was aching to break out on his own and design women’s clothing himself. During the show, he was praised for his craftsmanship and pattern-making skills by the show’s celebrity judges, including editor in chief of Elle Korea Shin Yoo-jin and fashion designer Kim Seok-won.

In recent years, Cinderella stories on television like Nam’s have helped alter the face of Korean television. Local television programs, once celebrity-oriented and thoroughly formulated, are now becoming more open and accessible thanks to reality television.

And the public cannot seem to get enough of it.

Last month, local cable network Mnet’s talent competition Superstar K, now in its second season, catapulted a fan repairman to national stardom and made Korean cable TV history: the show earned a rating of 18.1 percent during its live finale. Before Superstar K, no other show on Korean cable had broken the 10 percent mark.

The show also attracted more than twice the viewership of the most popular terrestrial programs airing at the same time. More than 1.3 million people voted via text message during the final show.

“The public is growing tired of scripted TV. The younger generation is well-versed in the Internet and media. They crave rawness and interactivity in television,” said Han Dong-chul, a chief producer at Mnet.

“In short, the public now demands television shows that actually reflect the reality they know - not a cleaned-up version,” Han added.

Except for documentary programs, reality television in Korea - going by the common definition of a genre of TV programming that features unscripted situations, both dramatic or humorous - is quite new. On terrestrial channels, the first such programs to have gained popularity are MBC’s “Infinite Challenge” and the KBS variety show “One Night Two Days,” which started airing in the late 2000s.

In comparison, reality shows have been a staple in American prime-time TV for the past decade.

Infinite Challenge takes the form of what local experts call a “real-variety” show, in which the host, comedian Yoo Jae-seok and other male entertainers go through various challenges, often silly and impossible to achieve. It is said to be the first real-variety program on Korean TV. At its peak, the show garnered a rating of almost 20 percent, making it one of the most-viewed nondrama programs in Korean television history.

One Night Two Days also features male celebrities, including its host, comedian Kang Ho-dong. Guests are put in trying situations and travel to different parts of the country. The show’s success has led to numerous copycats, including an all-female version called “Danyeoogetseumnida,” a Korean phrase that roughly translates to “I’ll see you soon.”

Many, however, have doubted the shows’ “reality” and have raised questions about how accurately the shows reflect society, as they rely heavily on celebrities. “Although Infinite Challenge and One Night Two Days paved the way for Korean reality television to develop, the shows are not entirely ‘raw’ reality TV per se. Although minimal, the celebrities have scripts, and they are celebrities, not real people faced with these situations,” said Won Yong-jin, a communications and broadcasting professor at Sogang University.

Won said Korea’s celebrity craze has made even the regular people featured in these so-called reality shows minor celebrities, or at least has laid the groundwork for these people to become stars in their own right.

The public’s enthusiasm for these shows waned with each passing season, which was reflected in their ratings.

Criticism of terrestrial real-variety shows came to a head early last year, when a leaked script for “Family Outing” was published in the Korean TV & Radio Writers’ Association’s monthly magazine. Netizens expressed disappointment, some even anger, at the thoroughly scripted nature of the show. Although the producers defended the script - saying it was merely a guideline - the outcry affected the show’s ratings. After three years, Family Outing went off the air earlier this year.

Cable television gets in the act

While real-variety shows were ruling the nondrama segment of Korean terrestrial television, local cable networks started to turn their attention to reality dating and audition-format programs - both imported and locally made, featuring noncelebrities.

“In a broad sense, around 90 percent of all programs on Korean cable TV are reality programs now. Cable is the perfect platform for edgy, nondocumentary reality TV because it is smaller in scale compared to network television, with a little less concern for harsh censorship,” said Han.

At the forefront in Korea were cable networks Mnet, QTV and OnStyle, which began producing relatively low-budget reality shows in the early to mid-2000s. The shows gained a steady following among viewers who wanted something edgier and different than what terrestrial networks had to offer. Among these networks, Mnet’s most popular reality shows catered to Korea’s younger generation, including “Seo In-young’s Kaist,” in which the singer attends the prestigious Korea Advanced Institute of Science and Technology for a semester; dating reality shows, such as “Ajjilhan Sogeting [Mind-blowing Blind Date],” featuring ordinary teens and 20-somethings in blind dates; and the recent Superstar K2, a singing competition similar in format to Britain’s Pop Idol and the U.S.’s American Idol.

Q Channel relaunched under the new name QTV last year with the slogan “100% Real Entertainment.” In the past, the channel featured mostly documentaries and reality shows such as “Switching Moms” - similar to popular British reality show “Wife Swap” - as well as imported programs including “Top Chef.” With the relaunch, QTV announced that it will only feature reality shows, with no scripted programs whatsoever.

OnStyle began airing successful, imported reality shows targeting female audiences in their 20s and 30s, including “Project Runway” and “America’s Next Top Model,” in which the contestants go through auditions and tough challenges to be selected as the winner.

On the heels of these shows’ ratings success, OnStyle then went on to air licensed Korean versions of the programs. “The advantage of these licensed Korean versions of popular reality programs is that the public is already familiar with the concept and format, thus making it easier for them to get into the show,” said Lee Woo-chul, head producer of the first season of Project Runway Korea as well as Korea’s Next Top Model.

In addition to its edgy appeal, reality television is a draw for cable networks because of its relatively low production costs compared to scripted shows. The New York Times reported last year that network reality shows cost around $1 million an hour, nearly half the budget for scripted shows.

But the low-budget appeal for cable networks is a burden for local reality television producers, who have found themselves at the bottom of the food chain, Lee says. “The average cost to make an episode of a reality program in the U.S. is around $1 million to $2 million. Now in Korea, I have to make the same quality of program with one-tenth the budget,” said Lee.

Nonlicensed reality programs, on the other hand, have been enmeshed in copyright controversies. Despite the success of its second season, Superstar K faced accusations of copying American Idol and Britain’s Pop Idol.

“There was some talk in the industry about lawsuits against Superstar K, in that it was supposed to have bought the license from Pop Idol, like American Idol did,” said an industry insider who refused to be named.

Superstar K’s head producer Kim Yong-bum, meanwhile, said that during the making of the second season, the show put more emphasis on the contestants’ personal lives, diverging from the “strong, competition-based structure that is popular on U.S. reality shows.”

Reality television is here to stay

The trend toward reality programming is growing stronger by the minute, according to local experts.

“Reality programming is the biggest trend in the local television scene at the moment. For the next few years, it will dominate cable TV and start seeping in more into network TV as well, in various forms,” said Won. He pointed out network broadcaster MBC’s singing competition “Great Birth,” which started airing early this month on the heels of Superstar K2’s success on cable. The first episode of the show gained a high rating of 8.7 percent, according to media research company TNmS.

Industry experts worry about the impact of these shows on the lives of the participants, because they are often unprepared to deal with the lack of privacy that comes with television exposure.

One such victim was Kim Gu-rim, a contestant on this year’s Superstar K. When she was typecast as being “selfish” by one of the show’s judges, netizens started brutally criticizing her online. In interviews after the show, she said she had suffered the toughest time of her life. The criticism, she said, affected not only her but her entire family.

But for those like Nam Yong-sub, who is reaping the benefits of overnight fame, reality television has given him a second chance and the promise of a better future. “The show was the greatest gift for me. If it weren’t for Project Runway Korea, I would probably still be working at the sales end of the fashion world,” he said with a lingering pause. “Without the show, I might have never gotten a chance to design and have my voice heard.”