Human rights head steadfast: he did no wrong

Human rights head steadfast: he did no wrong 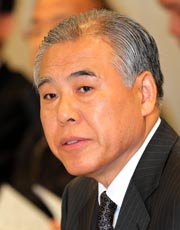 Hyun Byung-chul, chairman of the Human Rights Commission of Korea - which is reeling from mass resignations - said he has done his best to ensure the independence of the commission and denied that he kept silent on politically sensitive issues.

And, Hyun was adamant about one thing: he will not resign.

Hyun released a public statement yesterday in an attempt to explain the current disarray on the commission, where 61 officials quit Monday calling for Hyun to resign.

“I think it is right to tell you that there were some misunderstandings and distortions in interpreting my previous remarks,” Hyun said.

Hyun denied that he has kept from making any public comments on politically sensitive issues, adding that he has spoken out on important issues.

The 61 officials said that the chairman did not want to investigate any issues opposing the government and that he made unilateral decisions, not reflecting the opinions of other commissioners and members.

The 61 officials who resigned Monday said: “Since the current chairman was appointed, the commission has been called a ‘zombie organization,’ because he has paralyzed the commission’s functions by his unilateral and pro-government positions.”

But Hyun said yesterday: “After I started this job, the commission submitted seven advices about cases violating human rights and four proposals to the Constitutional Court, which were all approved by me,” Hyun said. “It is not true that I have kept quiet on human rights issues.”

In a separate statement to reporters, Hyun listed the four cases: the Yongsan fire; the confiscation of so-called “rebellious” books; age limitations on applying for jobs as policemen and firefighters; and the Military Criminal Law Article No. 92 - about sexual harassment in the military.

As for him making one-sided decisions, Hyun said, “all decisions were made by the 11 commissioners.”

Hyun said he will stay at his job “without being shaken by criticisms.”